Since starting as co-directors of the Carriage Barn Arts Center 18 months ago, Eleanor Flatow and Arianne Kolb have noted how visitors to the Carriage Barn gallery react strongly when they learn of its original function at Waveny. 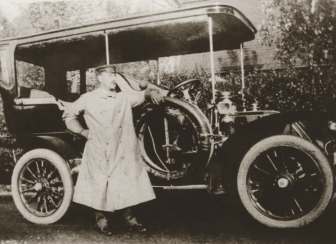 A Lapham family chauffeur stands by a motor vehicle by the Carriage Barn near Waveny House in the early-1900s. The Carriage Barn now is home to an arts center and gallery, and an upcoming exhibition, “Va Va Vroom,” and fundraiser event, “Monaco Grand Prix,” will pay homage to that heritage. Photo courtesy of Carriage Barn Arts Center

Though locals tend to know well the grounds, mansion and individual outbuildings at the park, Kolb said, the way that those pieces fit together and tell the story of the Lapham family—the longtime owners of the property through the first half of the 20th Century, who kept horses, carriages and cars in the Barn—animates the familiar landscape and structures in new, profound ways.

“When we explain what the space was used for, people have an ‘a-ha’ moment, where it makes sense in the bigger picture,” Kolb said. 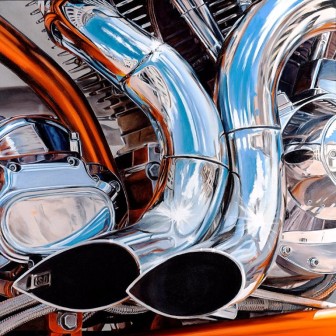 ‘Double Trouble,’ a painting by Alan Gorman, will be featured as part of the ‘Va Va Vroom! The Art of the Vehicle’ exhibition, opening April 19 at Carriage Barn Arts Center.

Starting next month, Carriage Barn Arts Center/New Canaan Society for the Arts will pay homage to that heritage in a new exhibition. “Va Va Vroom! The Art of the Vehicle” will run April 19 to June 14, with the correlating Monaco Grand Prix Fundraiser (tickets here) scheduled for 7 p.m. on May 16.

Curated by Marianne Brunson Frisch, the exhibition will include early photographs documenting the Laphams’ use of the 1895-built Carriage Barn, and will feature contemporary paintings, drawings, photographs and sculptures by 35 artists from Connecticut and New York as well as vintage advertising posters, motorcycles and car models. 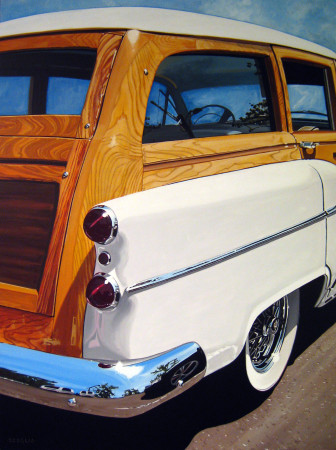 The stage at the far end of the Carriage Barn will feature three vintage motorcycles from the collection of New Canaan’s Buzz Kanter, including a British 1930s JAP racer, American 1947 Indian Chief and 1970s custom “street tracker” Harley-Davidson Ironhead Sportster.

Kolb said the feedback from the community since word of the exhibition got out has been “incredible.”

“We’ve had a huge amount of support and involvement on the part of local members of the community who are passionate about cars,” Kolb said. “Doug Zumbach has been incredibly helpful and supportive, not only as a sponsor, but also working with us on the show and exhibition and introducing us around. A car theme is a popular theme, and the history is an important element of the exhibition.”

Kolb noted that the New Canaan Preservation Alliance, a nonprofit organization that prompted the town to seek listing for Waveny on the National Register of Historic Places, also is a sponsor of the exhibition, and that the head of the organization will supply information for visitors about the historical significance of all the structures at Waveny.

“You cannot have Waveny without the Powerhouse, Carriage Barn, caretaker’s cottage and Lapham,” Kolb said.

Lewis Lapham and his family embraced vehicles as they built their home, Waveny House, on what was 480-acre countryside property, in 1912.

“The 1895 Carriage Barn, which was restored by the Laphams in 1913, originally housed horses, carriages, and cars,” Frisch said in a press release. “These included their stylish and expensive French 1903-04 Charron, Girardot et Voight touring car. Son Jack Lapham, his wife and their four children were pilots, landing their planes on the Waveny fields. Jack Lapham flew his two-seater Spartan biplane to Waveny from their Texas home in 1928, quite an impressive accomplishment at the time.”

Of the fine art to be featured at the exhibition, Frisch said in the release: “Works in all media focus on the various modes of transportation, from the past to the present,” the co-directors said in a press release. “Max Itin’s Fins photographic study of a 1959 Cadillac Eldorado iconizes this symbol of 1950s American automobile design. Miggs Burrough’s Indian lenticular photograph merges two images that alternate as the viewer passes by, conveying adventures from the motorcycle’s storied past. The masterfully rendered Radial Engine pencil drawing by Andre Junget details the elegant craftsmanship of a vintage airplane. Alan Sosnowicz and Ken Scaglia draw and paint reverent portraits of cars, spotlighting their signature features. David Barnett’s fanciful flying contraptions are intricately composed of extraordinary found materials.”

Other events that are tied into the exhibition include: