Two New Canaan Police officers on Thursday morning put their own lives at risk to save a motorist who suffered severe burns after a crash, officials said. 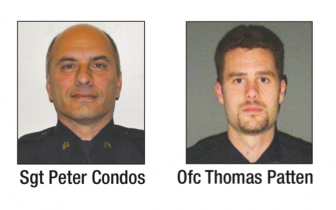 At about 9 a.m., police were dispatched to Rosebrook Road on a report of a vehicle on fire, according to Chief Leon Krolikowski.

There, they found a vehicle off the road and fully engulfed in flames, Krolikowski said in a press release.

Two of the arriving officers, Sgt. Peter Condos and Officer Tom Patten, ran down the embankment to the fully engulfed vehicle and found the motorist nearby.

“Despite the risk of the vehicle exploding, these officers put themselves in harm’s way to save the severely burned motorist,” the chief said. “These officers put snow on the burning motorist and used their bare hands to put out the flames on the motorist’s body, and then urgently provided emergency medical care. One officer received minor injuries as a direct result of these lifesaving efforts.”

The severely burned motorist received advanced care from the New Canaan Volunteer Ambulance Corps and was transported to a hospital, Krolikowski said.

“The officers whom put themselves in harm’s way, and provided lifesaving care, will soon receive our Department’s Lifesaving Award,” the chief said. “Thanks to their bravery, training, professionalism and expert care they saved a life.”

He continued, “We are proud of how these officers embody our mission which is ‘to protect and serve the community with courage, professionalism and integrity.’ Special thanks to NCVAC for being such a critical partner as we work side-by-side to handle hundreds of medical calls and medical emergencies. Especially during the holiday season there is no greater reward than saving a life.”