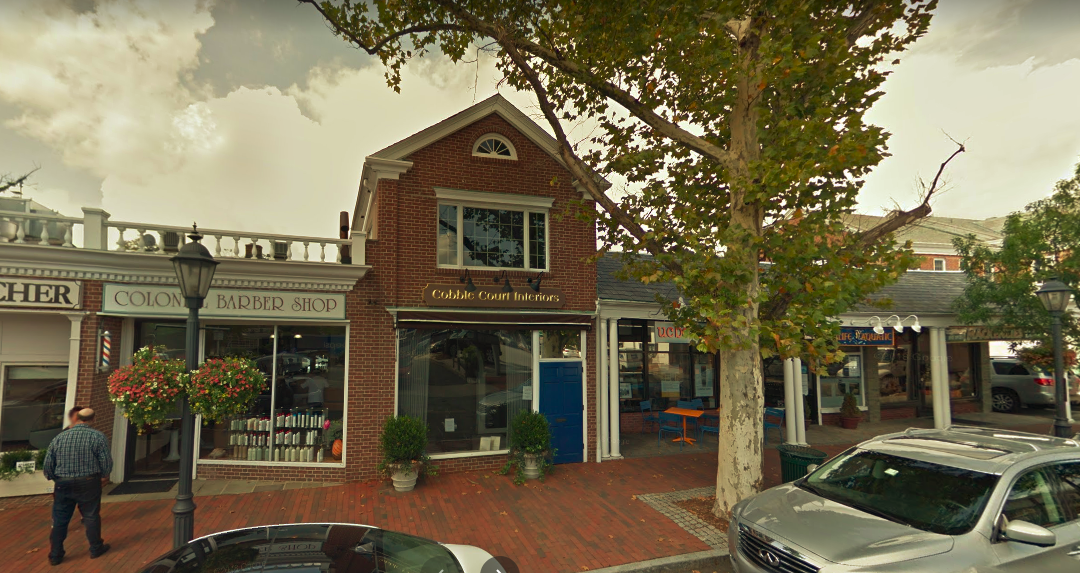 13 South Ave. used to be occupied by Cobble Court Interiors, which has since moved to 21 South Ave., just a few doors down. Streetview

A Westchester County man is applying to the town for permission to open a cigar and tobacco shop in downtown New Canaan.

The shop at 13 South Ave. would be open from about 9 a.m. to 10 p.m., according to a site plan application filed with Planning & Zoning by Yazan Mustafa of Yonkers, N.Y.

Under the New Canaan Zoning Regulations, site plan approval is required in the Retail A zone for retail shops, among other uses (see page 73).

The commercial space at 13 South Ave. had been occupied by Cobble Court Interiors, which moved just a few doors down to 21 South Ave.

During Tuesday’s regular meeting of the Planning & Zoning Commission, Town Planner Lynn Brooks Avni said that the town had originally considered recommending that P&Z deny the site plan application because it was incomplete at the time.

“Today [Tuesday] they have since completed some of the blank parts of the application,” Brooks Avni said during the meeting, held via videoconference.

“They have told us nothing except that they plan to open a cigar and tobacco shop which would be a retail establishment and would work in the zone under site plan approval. Their site plan, however, was submitted today. So this would be up to the discretion of the Commission. Staff originally was going to recommend a denial based on an incomplete application. But this would be up to staff. We have 65 days on a site plan so you can carry this over to next month if there are additional questions, because next month’s meeting is on the 16th of November.”

Ultimately, on a recommendation from Commissioner Kent Turner, P&Z decided to table the application until next month.

It isn’t clear when the new shop would open, if it gets approved by P&Z. The applicant could not immediately be reached by NewCanaanite.com. Mustafa appeared from the Zoom gallery to be in attendance at the virtual P&Z meeting but did not respond when Brooks Avni asked him to address the Commission.

Turner, an architect, said P&Z should seek “a little more clarification on the drawings.”

“There are no dimensions,” he said. “It appears there is no wheelchair access. The bathroom looks like it conforms to ADA but I think we need more information as to the size and the path of travel. The exit which is toward the bottom of the page where the stair is, certainly isn’t code-conforming. So what I see are some ADA and Building Code issues. Perhaps if it’s continued this person can provide additional information for us.”

Brooks Avni said she would work with the applicant to get the additional information prior to next month’s P&Z meeting.

One thought on “Cigar and Tobacco Shop Planned for South Avenue”