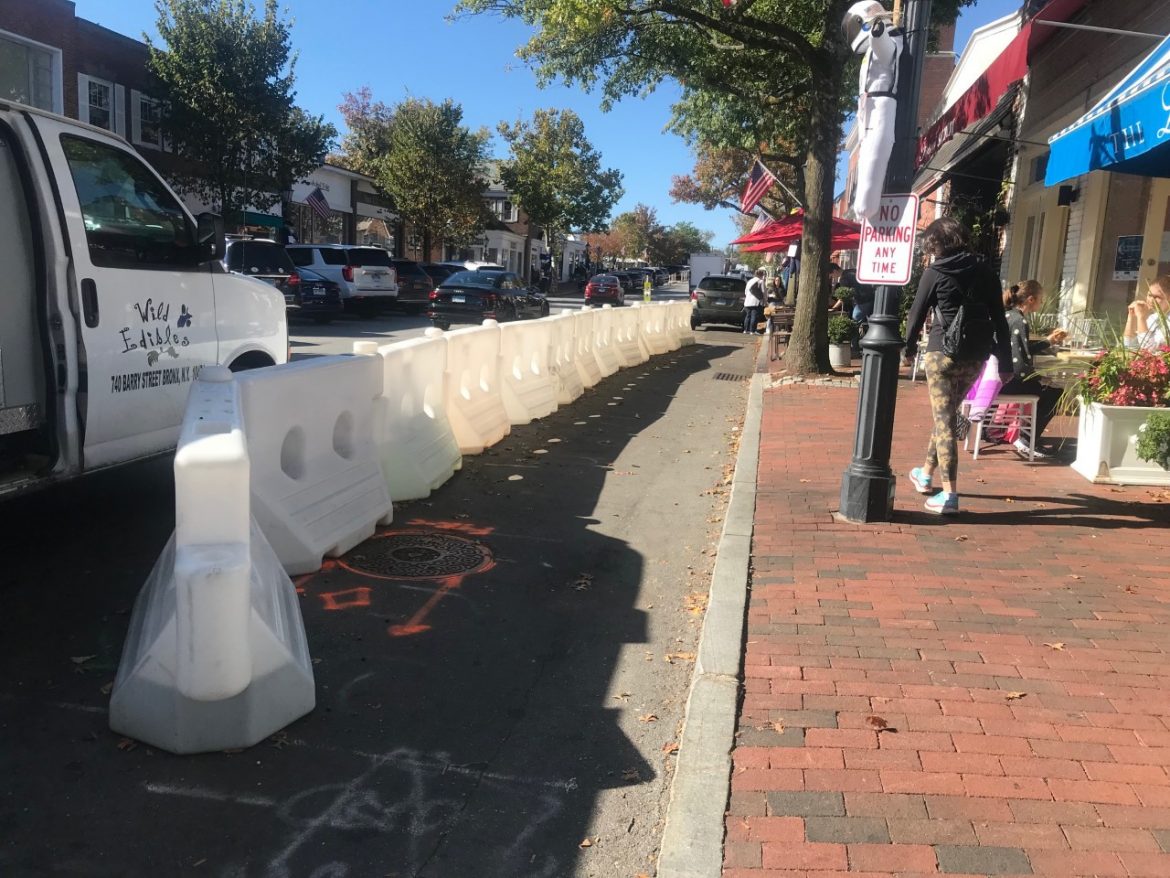 Elm Street near the intersection of Main Street on Oct. 20, 2021. Credit: Michael Dinan

The town has “made significant progress” in ensuring that public facilities comply with the Americans with Disabilities Act, and also is “committed to spending millions of dollars on upgrades and renovations” to achieve that goal, according to the head of New Canaan Public Works.

And during the COVID-19 pandemic, when outdoor dining was seen as “an essential element to the town,” municipal officials “met and discussed, at length, various alternatives to ensure that our local businesses were able to stay open and solvent and that the fabric of the town was preserved,” Public Works Director Tiger Mann wrote in a response letter to the U.S. Department of Justice, which is is investigating the town for ADA violations.

“Prior to COVID, the town had initiated the planning for improved pedestrian safety at mid-block intersections by designing sidewalk bumpouts to narrow the crosswalk,” Mann said in the Sept. 22 response letter, obtained by NewCanaanite.com through a public records request.

“Though still in design, this concept was applied in temporary form in consideration of expanding outdoor dining facilities. Following CDC guidelines, the initial six-foot designation of space required between tables for patrons and pedestrians passing any establishment was adhered to by the town by developing a plan of bumpouts using temporary barricades to relocate the pedestrian way outside of each establishment. Temporary asphalt transitions were provided, with drainage, to allow safe passage for able-bodied pedestrians and those with disabilities. The success of the initiative accelerated the plan to create permanent bumpouts, by permanently removing adjacent parallel parking spaces, thereby providing additional sidewalk space for our retailers and restaurants and allow for safe travel of pedestrians along the sidewalk. The final plans were approved by the Police Commission, after multiple meetings, and construction is slated to begin shortly, with a goal of completion by Oct. 31, 2021.”

The letter came in response to an Aug. 10 notification from the DOJ’s U.S. Attorney’s Office for the District of Connecticut that the feds had “received a complaint that New Canaan has not placed any restrictions on the restaurants and shops that are extending their businesses outside onto the sidewalk in town.”

“The complainant further states that the new town ball field, track and tennis courts do not offer parking spaces for people with a disability and that the bleachers at these facilities do not have any accessible seating,” according to the original notification letter, sent to First Selectman Kevin Moynihan by Leonard Boyle, acting U.S. attorney for the District of Connecticut.

The town was told to formally respond to the DOJ notice, and received an extension to Sept. 23 to do so.

It’s not clear who filed the complaint with the feds.

The DOJ instructed the town to include copies of all complaints regarding ADA and related violations received since 2010, and Mann cited 10 communications—one from Anne Treimanis and nine from Jeff Holland.

He also addressed the specific concerns listed, and reviewed the town’s effort to ensure adherence to ADA.

For example, regarding the New Canaan High School track and bleachers, Mann said the facility was “designed and performed with consideration of the law paramount.”

“We directed the designer to ensure that the associated bleachers were compliant with the relevant guidance provided for the law,” he said. “The bleachers are considered a small area of assembly and therefore require seating in quadrants #2 and #3 as well as at locations deemed the best viewing angle for spectators. The town placed the accessible seating in both quadrants and at the top of the bleachers since this was considered the best location to view events at the track. The town had been pursuing additional supplemental accessible seating for the bleachers and tack area. We were able to finalize the design, quote the work from a local contractors and have the quote approved by our first selectman in conformance with the town’s purchasing policy. We were about to begin construction on this supplemental seating and path work when we received the above referenced letter.”

Mann referred to a “recommendation” from the feds to “consult with this office prior to making any operational or architectural changes intended to address the allegations of the above mentioned complaint.”

In reviewing the town’s efforts, Mann noted the 2008 creation of New Canaan’s ADA Compliance Team to ensure “adherence to all provisions fo the Americans with Disabilities Act.”

In 2012, the town designed a new position—superintendent of town buildings—“whose job description included ensuring compliance with the law for all 57 town owned buildings,” Mann said.

“Subsequently, the town has spent millions of dollars upgrading its facilities and buildings,” he said. “The initial dollars spent on upgrades to our buildings and facilities focused on life, health, safety issues and ADA compliance. To that end, the town hires ADA and building code consultants fo reach large scale construction/renovation project to ensure compliance with the law.”

The ADA Compliance Team and town employees “take their role of stewards of the law very seriously with a strong commitment to fulfill requirements of the law from our first selectman and town fathers,” Mann said.

“We look forward to discussing our successes and future plans with you at your earlier convenience,” he said.