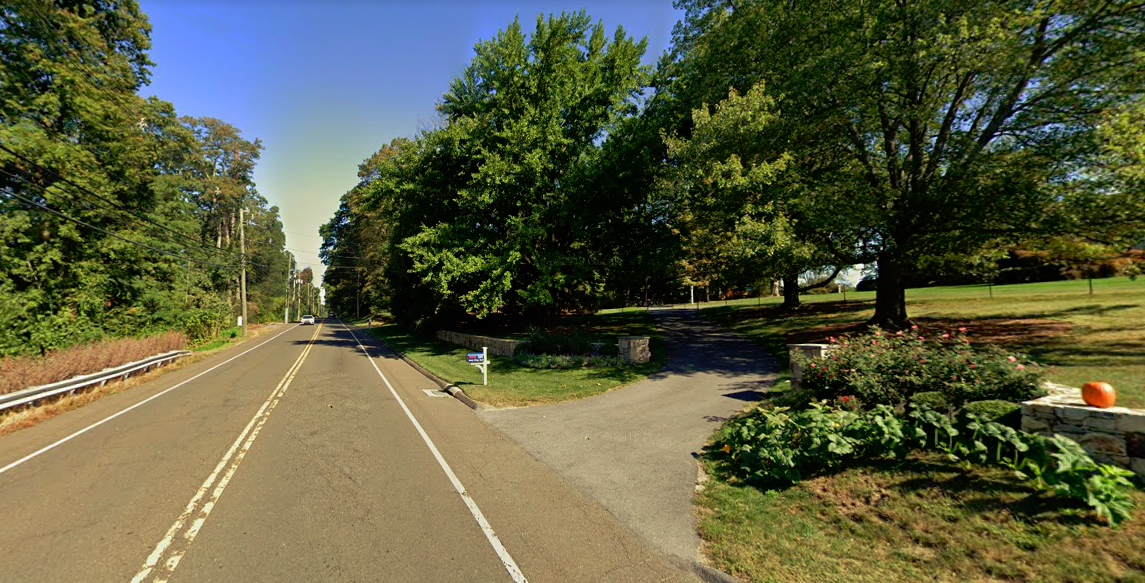 The chair of the Police Commission said last week that he would sign a letter to the state supporting a New Canaan homeowner’s bid to widen their curb cut along Route 123 by about 30%.

As it is, the driveway at 507 Smith Ridge Road is 26 feet wide at the curb cut, or four feet wider than what the state Department of Transportation would normally allow, a representative of the homeowner told members of the Police Commission at their Oct. 20 meeting.

Saying that traffic on the busy north-south artery often exceeds the posted speed limit, the homeowner is seeking to widen the driveway by eight feet more, to 34 feet total, landscape architect Allan Broadbent said during the meeting, held at New Canaan Police Department headquarters as well as via videoconference.

Broadbent said his client purchased the property earlier this year “and within several weeks had a few near-misses of almost getting rear-ended.”

“You all know how it is to drive on Smith Ridge,” Broadbent said. “Traffic flies, and so you have to really slam on your brakes to get into the driveway. So I was hired as landscape architect to investigate if we could make that safer. So we looked into the idea of just widening the entry a little bit so you don’t have to slam on your breaks to crank a hard right. Seems logical, so we contacted the state DOT and they said, ‘Absolutely not, we have our limit to the curb cut opening and there’s no nuance, no variance, there’s no way we can change that, sorry.’ Shortly thereafter there was an accident in front of that entryway and I personally have had two near-misses getting in and out of that driveway. So we felt like it was something we didn’t want to just accept the state’s ‘We don’t care, we don’t want to look at your situation.’ We thought maybe this deserves more dialogue. Maybe the state needs to have some nuance or some other options for homeowners that live on very busy roads that have dangerous exits and entrances to their property.”

It wasn’t clear what accident Broadbent referred to.

There had been an incident on April 28, when a motorist traveling northbound on Route 123 near the Country Club of New Canaan left the scene after striking a 56-year-old Ridgefield man on his bicycle.

The 5-acre property at 507 Smith Ridge Road was purchased for $6.6 million, according to a property transfer recorded June 8 in the Town Clerk’s office. It’s owned by a limited liability company, tax records show.

Commissioner Jim McLaughlin asked whether the homeowner or others at the property had had accidents pulling into the driveway and getting hit from behind.

Police Deputy Chief John DiFederico said no, but that he didn’t want to wait for one and that it could be “very nerve-racking” getting onto Route 123 from the driveway.

The Commission took no formal vote, though Chair Paul Foley said it would get behind a letter of support petitioning the state DOT to change its mind and allow for the wider access.

Broadbent said that “what would be helpful is a letter of understanding that the situation has safety challenges and that this kind of curb cut could be meaningful in mitigating those challenges.”

“If we had some local support I think then going back to the state and just bringing to them with further bolstering would be worth another try,” he said.

DiFederico said he would work with Broadbent to draft such a letter over the next month, for approval at November’s meeting.

Foley said to “speed it up” and “get a draft to us and we’ll rush it, because this is just insanity by the state.”

While introducing the item to the Police Commission, DiFederico said he was “very sympathetic to the cause” of the homeowner, “and I thought it was reasonable, so whatever support we can throw their way I would encourage.”

The driveway itself at 507 Smith Ridge Road itself is 16 feet wide, Broadbent said. Motorists pulling in have to deal not only with the width of the curb-cut as it is, but also soon after pulling in face a natural rise in the grade of the driveway which presents another challenge to entering the property at a rate of high speed.

During the meeting, Foley also told Broadbent that he should seek to get support from New Canaan’s delegation to the state legislature, and asked whether the homeowner lived in state Rep. Tom O’Dea’s district.