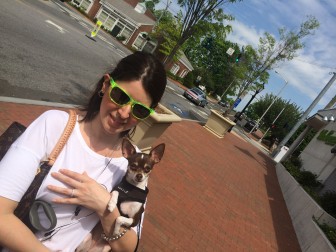 She was downtown on Pine Street this week—specifically, she said, to acclimate her 18-month-old Chihuahua, Cleo, to what soon will be her hometown. ‘Cleo’ is short for ‘Cleopatra,’ as Demirjian said: “We just wanted to give her a name that was as big as her personality, but that didn’t necessarily have anything to do with her body size.”

Sounded like a good candidate for “New Canine-ites,” so we probed further.

Asked how much advance scouting in New Canaan she’s doing for Cleo, Demirjian said: “I’m walking around here right now because of her. Because I figure there’s a lot of smells and things to keep her attention occupied, and to make her feel social.”

She described Cleo this way: “She is very adventurous, she is fearless, she is very curious but very sweet at the same time, and very protective and loyal.”