Though it’s not planned just now, state officials say a canopy will be installed on the platform at Talmadge Hill Station along Metro-North Railroad’s New Canaan branch line. 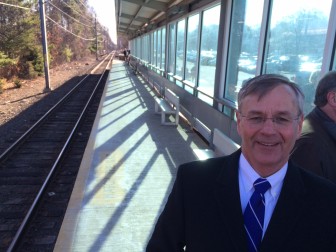 Following a press conference Tuesday with the governor at Springdale station, NewCanaanite.com asked Connecticut Department of Transportation Commissioner James Redeker about the canopy at Talmadge Hill—a project that was to have been completed 10 years ago.

“Right now it’s not programmed for an investment,” Redeker said from the platform at Sprindale. “You can see here we actually installed these canopies this past year, platform extensions. So we believe as part of this line upgrade we should have all those canopies done and we should upgrade all of our stations in addition to taking a look at parking expansion.”

The Talmadge Hill station has only a few scattered weather shelters, but not a canopy—the responsibility of the state, as per New Canaan’s lease with the DOT.

Planning for a canopy at Talmadge Hill goes back to 1995, and First Selectman Rob Mallozzi since last summer has been looking for the DOT to finish it, as well as to install a ticket kiosk there.

State officials are predicting a 44 percent increase in use of the New Canaan branch line over the next 15 years.