The state still hasn’t acknowledged or responded to a letter sent this summer by New Canaan’s highest elected official—a call to install a ticket kiosk and canopy at the Talmadge Hill rail platform, a nearly two-decades-old effort. 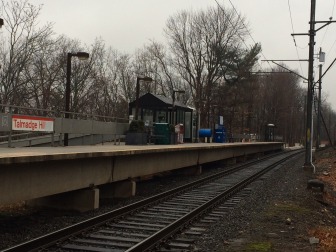 According to First Selectman Rob Mallozzi, the Connecticut Department of Transportation hasn’t indicated either way whether the state agency would “spend any time in review of what the necessities are for that platform.”

“The fact is I was following up on something that this town has had an interest in since 1995,” the first selectman said. “And when the first selectman cannot get a response from an agency, it’s extremely disappointing. And I feel bad for our commuters, who seek my assistance in helping to get something done. You think you’re going through the right channels and you’re polite about your outreach and to have no response whatsoever, it’s disappointing.”

“As I understand it, Talmadge Hill station may be the only station on the branch line without a weather canopy,” Mallozzi said in a letter sent Aug. 14 to the DOT public transportation bureau’s rail administrator.

“The station serves as the main departure and terminus for some 275 permit holders as well as 120 daily members of the commuting public. I would appreciate, and by this letter, do formally request a review of this deficiency and a possible timetable for its remedy.”

The Talmadge Hill station has only a few scattered weather shelters, but not a canopy—the responsibility of the state, as per New Canaan’s lease with the DOT. A review of correspondence in New Canaan shows that the project was to have been completed 10 years ago, DOT officials have said, and planning for it has been ongoing since 1995.