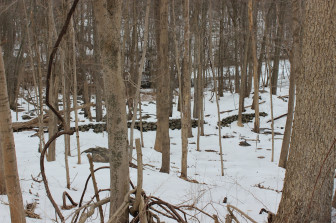 Drive slowly along the upper reaches of Ponus Ridge and you can glimpse the last vestiges of a once-thriving New Canaan community, most of which now exists deep beneath the Laurel Reservoir.

Beyond the chain link fence surrounding the lake, myriad stone walls crisscross through the trees, some of which suddenly disappear into the water.

This is all that remains of Dantown. 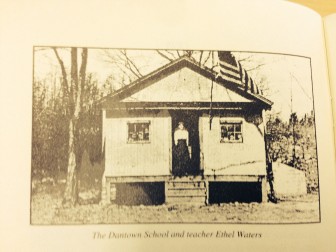 For Bob Tilden of Montour Falls, N.Y., the search for Dantown began as a search for his ancestors. One of these ancestors, Francis Dan, arrived in what was then Stamford in the late 17th Century, eventually settling a community by the Rippowam River near the New York state border. Dan and other residents of the area established a mill on the river, but it was a different industry that set Dantown apart and helped it grow. 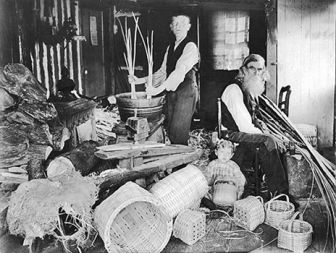 So did the oyster farmers of the Long Island Sound, and by the mid-19th Century, Dantown’s basket-making had earned regional renown. Nearly 80 families in the Dantown area were involved in the trade at its peak. In fact, according to the Stamford Historical Society, the baskets themselves could be used as legal tender within 50 square miles of Dantown. 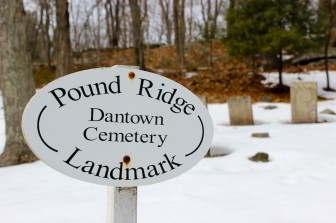 Dantown founded its own school and was also the site of the first Methodist Society church in New England, historians say, built in 1797. Although the church was razed in 1844, the Dantown Cemetery–once in the shadow of the church–is still (barely) visible on a hill overlooking Lower Trinity Pass Road, just over the state line. Several names familiar to New Canaanites are etched on faded gravestones: Dan, Hoyt, Selleck and Pennoyer. 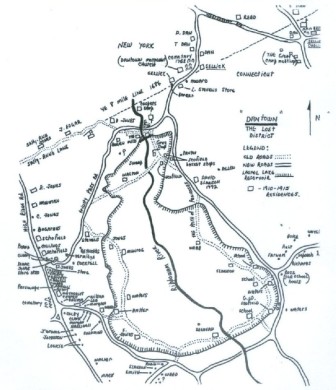 Unfortunately for Dantown, the end of the boom was near. A typhoid outbreak in 1902 was linked to infected oysters and the demand for the Dantown baskets dwindled. In 1923, Stamford needed to ensure the city’s water supply, so a dam was built across the Rippowam, flooding the area for the creation of the Laurel Reservoir. 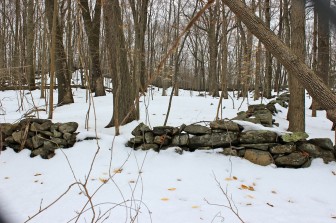 “All those old footsteps are buried—they’re gone,” Tilden said after visiting the site. “When we were there you could see the footing of some of the old buildings that used to be there along the shoreline, where the water would normally be. But the water was low.”

And although it was a 4.5–hour trip from Montour Falls, N.Y. to New Canaan, it was well worth it for Tilden. 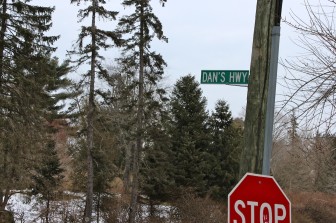 “It’s just the fact of being there, being where our ancestors trod,” Tilden said. “You can’t beat the view from the ground. The stone walls that disappear into the lake, the roadways that you can see, but haven’t had wheels on them in a long time.” 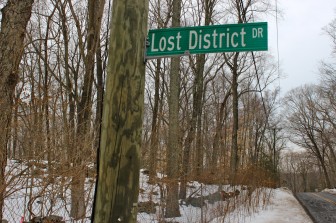 Dantown is long gone, but it’s not forgotten. In 1948, what was then called Lockwood Road was renamed ‘Dan’s Highway’ for the founders of Dantown. And in the late-1960s, Lost District Drive was named in honor of Dantown, New Canaan’s version of the lost city of Atlantis.

4 thoughts on “Dantown: The ‘Atlantis of New Canaan’”

Leave a Reply to Herbert I Dann Jr Cancel reply