A divided Town Council on Wednesday night voted 8-4 in favor of a revisited bonding package of $3.9 million for the fields projects now underway at New Canaan High School—$800,000 more in taxpayer money than had been committed in April. Those voting against the spending were Christa Kenin, Kathleen Corbet, Joe Paladino and Jim Kucharczyk. Those voting in favor were Cristina A. Ross, John Engel, Ken Campbell, Penny Young, Bill Walbert, Steve Karl, Kevin Moynihan and Sven Englund. 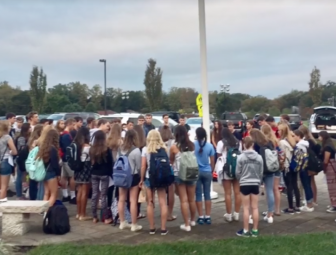 NCHS students gathered for prayer at the flagpole out front of the high school on Sept. 27, 2017. Photo published with owner’s permission

Dozens of New Canaan High School students at 7 a.m. Wednesday gathered at the flagpole out front of the Farm Road facility to pray together as part of the national “See You at the Pole” movement. Participants included members of St. Aloysius Church, Church of Jesus Christ of Latter-day Saints and Congregational Church of New Canaan. Started in 1990, See You at the Pole is “simply a prayer rally where students meet at the school flagpole before school to lift up their friends, families, teachers, school, and nation to God,” according to its website. 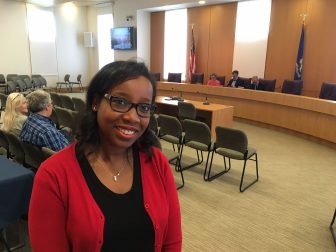 The Board of Selectmen voiced high praise this week in voting 3-0 to approve the hiring of Keisha Biggs Fink as a part-time interim town planner. “I have to say the reviews have been awesome” from both staff and residents, Cheryl Pickering-Jones said during the selectmen’s meeting Tuesday. First Selectman Rob Mallozzi and Selectmen Beth Jones and Nick Williams voted 3-0 in favor of the move. Mallozzi praised Fink’s “demeanor and attitude” and said he’s been “awfully impressed” with her work.

The New Canaan Basketball Association’s tryouts for the 2017-18 season are scheduled for the week of Oct. 9. See a full schedule here. 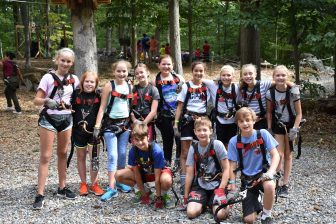 The First Presbyterian Church of New Canaan youth groups went to the Bridgeport Adventure Park for a three-hour climb in the trees—an annual favorite among youth group activities.

We hear from readers that the Darien woman arrested a few weeks ago following a complaint that she had been cycling in the middle of the road in northeastern New Canaan, obstructing motorists seeking to driver around her, has been spotted doing the same in town since then. According to public records on file with the Connecticut Judicial Branch, the same woman—a medical doctor—earlier this year sued Greenwich Hospital after the hospital fired her, ostensibly for filing of a false sexual harassment complaint. According to public documents on file with the New York State Unified Court System, the same individual earlier had brought a complaint against Icahn School of Medicine at Mount Sinai, saying she had been fired from its residency program in pathology because of her race and/or national origin. She is from Nigeria, according to court records.

The Encore Club of New Canaan has launched its new website. A special coffee is planned for ladies from New Canaan and surrounding towns on Wednesday October 4th at 9:30am at the home of Encore’s current president, Mary Liz Lewis (34 Squires Lane, New Canaan). Those interested should RSVP to Joan Allocca at jcallocca1@gmail.com. The informal gathering will share with prospective new members some of the exciting activities available throughout 2017-2018. Some of that includes golf, tennis, book group, Critics Corner for movie goers, bridge, Mah Jongg, hiking, New York trips, pot luck dinners with significant others or friends.

Finally, the selectmen this week approved the following tree pruning and removals across New Canaan as part of a $14,400 contract with Almstead Tree & Shrub Care: