The New Canaan Building Department on March 6 issued an after-the-fact building permit for $30,500 of work done to finish a basement at 15 Turner Hill Road. The work, which led to $780 in fees and was overseen by the homeowner, included adding a bathroom, bedroom and playroom, about 450 square feet, the permit said. “Kindly note that ll the above work was done without obtaining the necessary permits,” it said. “This means that all required inspections during construction were not performed.” 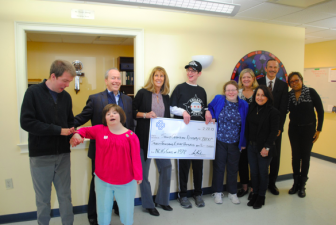 The New Canaan High School Class of 1978 raised $7,800 for the Saint Catherine Center for Special Needs in memory of Katherine Schlegel, who tragically passed in early September. She was the daughter of Elena (Peters) and Stephen Schlegel. The class’s 40th reunion was held Sept. 29 at the Silvermine Art Guild and Katherine Schlegel’s memory was a focus of the evening. A generous classmate underwrote the costs of the event so that donations could go toward a class gift, gathered with the help of a fund organized through the New Canaan Community Foundation. Katherine Schlegel carried a bright, bubbly personality in life and was a quick friend to many people she met along the way, according to those who knew her. As her father, Steve Schlegel, pointed out, “Katherine was always the brightest light in the room.” A group from NCHS ’78 recently visited Saint Catherine Center for a tour and to present the class gift. For the 39 students and young adults attending Saint Catherine Academy and the Adult Day Program, the faculty and staff have become a second family and a comfortable place to grow, explore and mature.

The partnership formed to redevelop Canaan Parish, the Section 8 housing complex at Route 123 and Lakeview Avenue, has requested approval from the U.S. Department of Housing and Urban Development to increase rents as follows:

According to a letter from Canaan Parish Redevelopment LP in which “the Project” refers to the partnership’s acquisition of Canaan Parish, the requested increase “is necessary to secure financing to acquire the Project and to implement an extensive redevelopment plan in order to preserve the Project as affordable housing for the future.” The letter notes that those who continue to be eligible under HUD guidelines for Section 8 should not be affected by the increases.

New Canaan Police at about 10:39 a.m. Monday cited a 19-year-old Saratoga Springs, N.Y. woman for possession of less than .5 ounces of marijuana, possession of drug paraphernalia and speeding after stopping her car for traveling on Route 123 at 63 mph in a 45 mph zone. At about 4 p.m. Friday, police cited a 26-year-old Stamford resident for possession of drug paraphernalia after stopping the individual’s car on Ponus Ridge for having license plates obstructed by a dark tint cover. 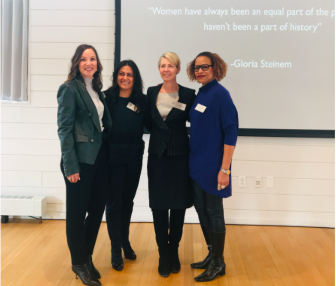 LiveGirl and the Grace Farms Foundation co-led a networking luncheon in celebration of International Women’s Day (March 8th) that included representatives from more than 25 companies that support girls and women statewide. The event was hosted by the Grace Farms Foundation and featured a keynote address by Dr. Vida Samuel, a professor of Women’s Studies at UConn Stamford, who also facilitated a discussion on building a gender-balanced world.

The Board of Selectmen on Tuesday voted 3-0 in favor of the town hiring two people on a part-time basis, George Cody as deputy registrar and Robert Mantilia as administrative assistant in the Registrars of Voters’ office. Officials said they would earn $15 per hour in the positions.

New Canaan’s Emma Garner is to play in Saturday’s Class S state title basketball game at Mohegan Sun. She plays for No. 7 seed Trinity Catholic, which will take on No. 1 seed Canton for the championship game. Good luck, Emma.

Parking Commissioner Stuart Stringfellow, reporting back to the Parking Commission at its regular meeting Thursday evening at Town Hall on a Freedom of Information Act informational session held in January, said: “It was the most boring thing I’ve ever been to in my life.”

The Board of Finance last week approved a $150.1 million budget for next fiscal year, a .02 percent increase from current spending. “This is the lowest town-wide budget increase in the last decade,” according to a press release issued by First Selectman Kevin Moynihan. 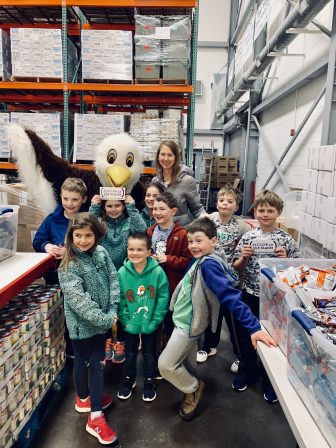 East School students from New Canaan at the Filling in the Blanks.

About 60 East School students from New Canaan gathered at the Filling in the Blanks warehouse last Friday to assemble 800 food bags that will be distributed by the organization to area children in need. This project marked East School’s first Community Service Night, hosted by East PTC.

Planet New Canaan and the town are collaborating on a free event—“What’s In, What’s Out, and Why”—to be held 10:30 a.m. to 12 p.m. on April 2 at New Canaan Library. Tiger Mann, Director of New Canaan Public Works, will be joined by Jennifer Heaton-Jones, Executive Director of the Housatonic Resources Recovery Authority, and Jay Greco and Patricia Swope from City Carting “to give us everything we need to get recycling right,” organizers say. “What can and can’t be recycled? How does recycling get contaminated and what are the consequences to our budget? Who (individual, hauler, Town) is responsible for what? How does the Transfer Station work? Where are the markets for recycled materials? There will be time for specific questions and answers at the end.”

Finally, we hear from the New Canaan Community Preschool, New Canaan’s oldest preschool located at Kiwanis Park, that the organization recently started making improvements to its “Nature Path” in order to further enhance its outdoor play space. Phase one of the project was completed this winter: trees and overgrown brush were removed to make way for interactive paths. This spring, NCCP plans to add outdoor instruments and new plantings, putting the finishing touches on our outdoor interactive “classroom,” a natural extension of the children’s indoor learning space.