One of the parties that contacted First Selectman Kevin Moynihan last month to express interest in acquiring a piece of town-owned property at Lapham and Talmadge Hill Roads was the Talmadge Hill Community Church, which is located catty-corner (in Darien). Church officials told Moynihan they’d like to move across the street, he said.

The town on Monday received a notice of a lawsuit filed on behalf of the owners of 62 and 64 Main St., appealing the Board of Assessment Appeals’ decision to uphold the Oct. 1 valuation of their property. The commercial buildings house Chef Prasad and Ching’s Table restaurants. The suit names the town as a defendant and was filed by attorney Michael Reiner of Farmington-based Greene Law PC. 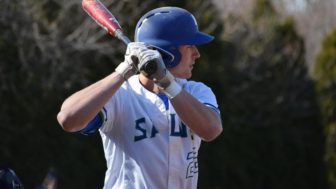 Congratulations to 2015 New Canaan High School graduate Zack Smith on being named baseball’s Player of the Year in the Commonwealth Coast Conference. A senior captain and right-fielder at Salve Regina University in Newport, R.I., Smith led the conference in number of categories, hitting .438 while knocking 56 hits, 13 doubles and eight home runs. His batting average (20th) and slugging (23rd) numbers were also in the top-25 in all of Division III. “Zack has had one of the best offensive seasons I have ever seen and I would say it’s probably top five ever in the history of the program,” former All-American and sixth-year head coach Eric Cirella said in a press release.

New Canaan Police at 8:13 p.m. Wednesday arrested a 59-year-old Millport Avenue woman and charged her with violation fo probation. The woman had been charged by NCPD in October 2017 with sixth-degree larceny and then in January with driving under the influence. She pleaded guilty to both charges, Connecticut Judicial Branch records show. Police held the woman on $50,000 bond and scheduled her to appear Thursday in state Superior Court. 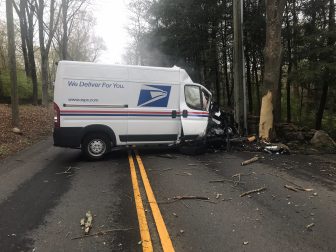 The USPS truck that crashed on Valley Road on May 1, 2019. Photo published with owner’s permission

The driver of a U.S. Postal Service truck was transported to Norwalk Hospital’s Emergency Room with minor injuries after striking a tree in the area of 781 Valley Road around 2:30 p.m. Tuesday. The single-vehicle accident is under investigation and no citations have been issued in connection with it, police said.

More than 25 local retailers and restaurants in New Canaan and Darien pledged to donate a percentage of sales earned from 1 to 6 p.m. on May 15 to the nonprofit organization Horizons, located at New Canaan Country School. Participating New Canaan retailers include Press Burger, Walter Stewart’s Market, Vineyard Vines, Wave and the New Canaan Toy Store. Darien retailers include bistro Baldanza and the Darien Toy Box.

The U.S. News & World Report has ranked New Canaan High School No. 6 in the state and No. 342 in the nation. 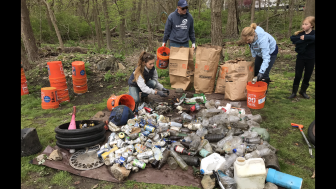 The recent Clean Your Mile effort yielded 350 pounds of trash in two hours along the Fivemile River. Some 20 volunteers found many plastic bottles as well as four tires, the volunteers said.

The New Canaan Building Department on April 26 issued an after-the-fact permit for $38,000 in work done at 40 Lakeview Ave. by the home’s owners. They finished a portion of the existing basement, renovated an existing finished attic and partially finished a storage and laundry room area, according to the permit. They ended up paying the town $805 in fees.

Commercial property owners during an April 11 meeting organized by the Chamber of Commerce said that New Canaan needs to “take every opportunity we can for positive press” and that “public commentary needs to be more positive,” according to meeting notes obtained by NewCanaanite.com through a Freedom of Information Act request. Recommendations that came out of the meeting were discussed this week with members of a Planning & Zoning Commission committee as well as with the Parking Commission. 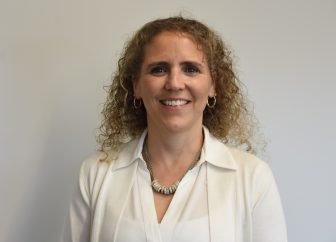 New Canaan Public Schools announced Monday that Dr. Tammy Hartman will work as the new NCHS Special Education Administrator effective July 1. Her responsibilities will include LAUNCH, the Alternative “Downtown” Campus, and the SPED program 9-12, officials said. Hartman is joining the district from Ridgefield Public Schools, where she has served as the Coordinator for Psychological Services.

Finally, a reminder of some worthwhile local events coming up soon:

Ashes to Go at the New Canaan Train Station

Ash Wednesday, Ashes and Communion Throughout the Day