The New Canaan Building Department on Tuesday received an application to renovate about 1,000 square feet inside the prominent Greek Revival-style home at 63 Park St. that once was owned by Maxwell Perkins, the great Scribners editor of Ernest Hemingway, F. Scott Fitzgerald and (the original) Tom Wolfe. 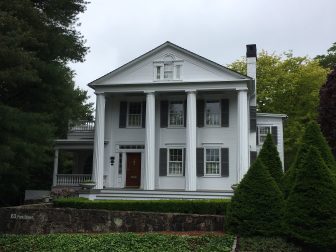 Plans refer to an “exhibit space,” “reception” area, “photo darkroom.” The estimated $50,000 job will involve adding a catering kitchen and half-bath, according to the application. The architect on the job is Williams Earls AIA, the application said. The property had been purchased for $2,475,000 in November by a limited liability company whose principal is listed in state records as David Peterson. The ownership LLC itself is owned by a second LLC, whose principals are Peter F. Healy, John F. Weber and Robert Ingato, according to Connecticut Secretary of the State records.

The Police Commission on Wednesday voted 3-0 to approve a request from the Young Women’s League to close Forest Street from about 2 to 10 p.m. on Sunday, Sept. 15 for an open-air dinner that will double as a fundraiser for the grant-giving nonprofit organization. In making the application to the Commission, the League’s Nancy Daniels and Chamber of Commerce Executive Director Tucker Murphy said they were aiming at sit-down, three-course farm-to-table family style dinner for 150, and that participating local restaurants include Baldanza, Cava, elm, Embody, Gates, Locali, New Canaan Diner, Roger Sherman Inn, Solé, South End and SE Uncorked. The League’s giving theme this year is “today’s kids, tomorrow’s future,” they said. 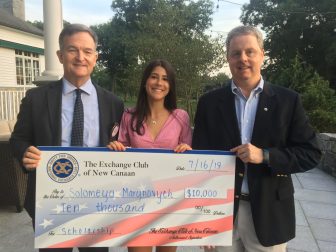 Congratulations to New Canaan High School graduate Solomeya Marynovych on earning the Exchange Club Scholarship, a $10,000 four year grant made to graduating seniors. It is designed to promote and reward students who demonstrate attributes and behaviors consistent with the goals and activities of Exchange Clubs throughout the United States specifically: character; persistence; community service; and serve as an inspiration to others.

First Selectman Kevin Moynihan said Thursday that a development regarding improved cell coverage in the northeast part of New Canaan is “very imminent.” Moynihan referred during a media briefing held in his office to a Soundview Lane resident’s plan to use his uniquely situated property to bolster service in the area—a proposal that’s been on hold, as no lease agreement with a cell service carrier has materialized. 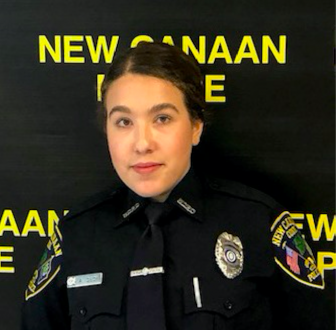 Congratulations to New Canaan Police Officer Annamaria Ceci, who graduated July 10 from the Police Academy and has started her on-the-job field training with NCPD. 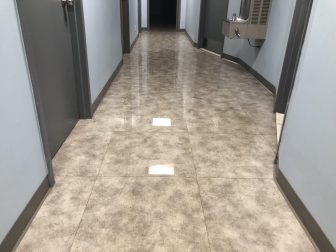 Flooding in a downstairs hallway at New Canaan library, July 2019.

The rainfall put pressure on municipal storm drains that pushed back into the library’s drains, she said, bringing on a “geysering effect of water erupting at about waist level from the drain outside the Lamb Room.” The library is raising money for a widely anticipated rebuilding project.

Police Chief Leon Krolikowski said during the Police Commission meeting that burglaries are down to five this year through June compared to eight at the same time in 2018. Larcenies from vehicles are up to nine compared to eight one year ago, he said, while motor vehicle crashes with property damage are down from 230 to 213, but accidents with injuries are up to 23 from 16. 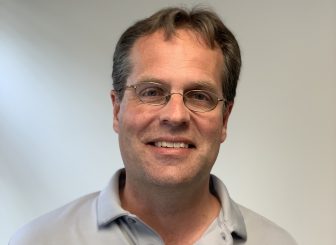 Finally, New Canaan Public Schools Superintendent Dr. Bryan Luizzi this week announced the appointment of Robert Rousseau as the new Elementary School Special Education Administrator for grades Pre-K to 4. Since 2003 the co-coordinator of the Special Education Department at Newtown Middle School, Rousseau earned a bachelor’s degree in psychology from Iona College, a master’s degree in education and professional certificate in school psychology from Queens College and his CAGS in advanced educational leadership from University of New England.