The top-3 reasons newcomers moved to New Canaan in recent years are (in order) quality of schools, family friendliness and downtown environment, according to a survey conducted recently by interns working in the first selectman’s office at Town Hall. The survey, which went to about 300 prospective respondents whose contacts are on file with the Newcomers Club of New Canaan, also showed that Darien is, by far, New Canaan’s biggest competitor in drawing new residents (followed distantly by Westport and Greenwich), and that many newcomers are seeking an extension of hours for businesses and restaurants, which are often closed after taking a later train home from working in Manhattan. 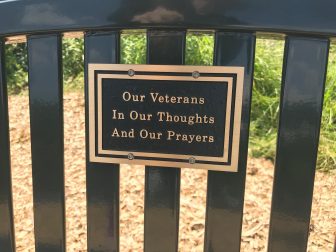 Many thanks to Eagle Scout candidate Henry Pohle, who has installed two new benches dedicated to New Canaan veterans along the Gold Star Walk, a memorial walk dedicated to local men who perished during World War II, in Mead Park.

New Canaan Police at about 2:25 p.m. on July 25 cited a 49-year-old Norwalk man for possession of less than .5 ounces of marijuana and possession of drug paraphernalia after stopping him for not wearing a seatbelt on Mead Street.

Planet New Canaan has launched an effort whereby, during August and September, for every $75 worth of native pollinating plants purchased at South Salem, N.Y.-based Copia Home & Garden, $10 with of plants will be donated to the New Canaan Land Trust, a “Pollinator Pathway” partner. 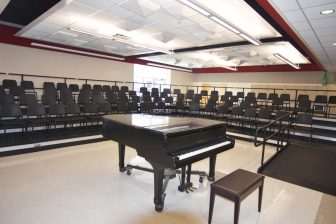 The Board of Education voted unanimously at its July 15 meeting to accept the Saxe Middle School expansion and renovation as complete, a capital project started three years ago that came in on time and under budget, district officials said. The chair of the Saxe Building Committee was Penny Rashin, vice chair Jim Beall.

Finally, First Selectman Kevin Moynihan on July 25 “flipped the switch” at Town Hall to activate solar energy there. “The new system will enable the town to realize substantial annual electricity cost savings and move the town toward more resilient, renewable and clean energy,” according to a press release issued by the town. “In addition to substantially reducing. Town Hall’s electrical load from the grid, the town will be able to sell back surplus energy produced to Eversource and also capitalize on renewable energy credits.” 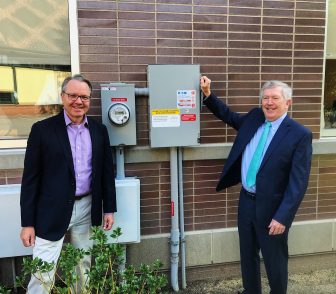 Mark Robbins of MHR Development, formerly a candidate for a state representative seat, has been managing the project. Other municipal buildings getting solar power include the Animal Care building at the New Canaan Nature Center, Waveny Pool house and Highway Department garage. Solar panels also are to be installed this summer on the South School roof.