South School students underwent a safety drill Thursday afternoon, according to an email sent to parents by interim Principal John Grasso. It was “an opportunity for staff and students to practice the procedures that are in place to secure the building in the event of a safety threat to the school,” Grasso said in the email. 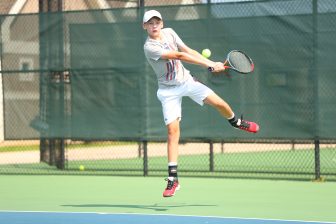 Congratulations to New Canaan’s Jack Mountford, 11, a Saxe Middle School 7th-grader who qualified this summer to play in major U.S. junior tennis tournaments, including the National Championships on both clay and hard court surfaces. In early July Mountford traveled to Orlando, Fla., for the 12 & Under National Clay Court Championships. In August, he played the National Championships on hard courts in Mobile, Ala. In both events, Mountford made it several rounds eventually running into some of the top-ranked American players.

New Canaan Police this week reported 232 motor vehicle violation-related incidents in August, down from 346 in the year-ago month. Noise/nuisance incidents increased in the same period, from seven to 18, while radar-related incident fell from 58 in August 2018 to 30 last month, according to data presented during the Police Commission’s regular meeting. Total incidents declined from 1,482 to 1,088 from August 2018 to last month, a 26.6% decline. 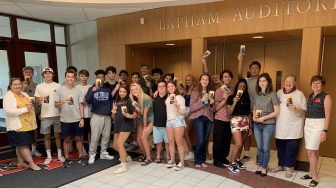 Members of the Daughters of the American Revolution visit NCHS. Contributed

The New Canaan chapter, Daughters of the American Revolution, represented by Regent Kathleen Tesluk (right) and Constitution Week Chair, Sue Socci (2nd on the right), visited New Canaan High School during Constitution Week to spread awareness and hand out copies of the U.S. Constitution to history students and social studies teacher Kristine Goldhawk (left). On 17 September 1787, the delegates to the Constitutional Convention signed the United States Constitution. In 1955, the DAR petitioned Congress to set aside the week of Sept 17-23 every year to observe Constitution Week.

First Selectman Kevin Moynihan said during the Board of Selectmen meeting Tuesday that it appears four parties are preparing to respond to the town’s RFP to acquire Vine Cottage. The deadline for responses is Sept. 30.

Registration is open for New Canaan Squash. Programs are available for boys and girls kindergarten through 12th grade. Organizers are hosting a high school “Try Squash” program at Chelsea Piers from 3 to 4:30 p.m. on Sept 22 and 29. New this year is a “Girls Only Squash Fit” program for girls 5th to 8th grade. For more information on any of these programs please visit http://www.ncsquash.com.

Public Works officials said during the meeting that they had to start line striping work at high motor vehicle and pedestrian traffic crosswalks in town prior to receiving formal selectmen approval of an approximately $22,000 contract for the work, because school was starting. 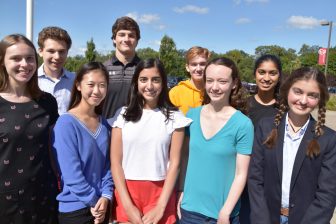 The selectmen voted 2-0 to appoint Allyn Magrino Holmberg to the Tourism and Economic Development Advisory Committee. Moynihan said the Committee had a resignation. A look at the originally appointed group indicates that the departing member is Richard Battista, former president and CEO of Time Inc. 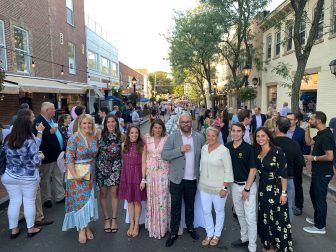 The Young Women’s League of New Canaan’s sold out “Dinner Downtown,” benefitting ABC House and the League’s charitable fund, was a resounding success, by all reports. The al fresco dinner was held Sunday on Forest Street, with approval from the Police Commission, and organizers have said they hope to hold it in the future on Elm Street.

Police at 7:30 a.m. Tuesday cited a 31-year-old Norwalk man for possession of less than .5 ounces of marijuana, possession of drug paraphernalia and speeding after stop him for exceeding the speed limit on Oenoke Ridge. About 24 hours later, a 42-year-old Bridgeport man was cited on a minor marijuana charge after an office stopped him on One Ridge for not displaying a front license plate. 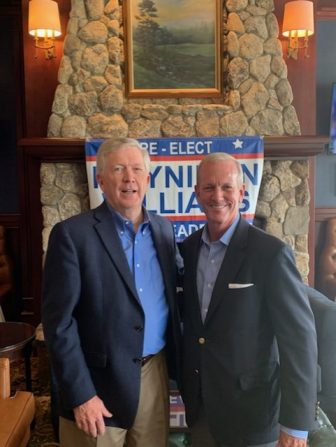 Finally, those seeking New Canaan’s highest elected offices have officially kicked off their fall campaigns. On Sept. 8, Moynihan and Selectman Nick Williams, both Republicans, launched their campaigns at an event that drew more than 170 GOPers, Democrats and unaffiliated residents, according to a press release. The incumbents announced their re-election bid jointly in April, and at this month’s event reviewed many “initiatives and accomplishments of the current term and their goals for the coming term.” According to the press release, “Both continue to seek ways for eliminating costs and finding new opportunities for collaboration among departments and neighboring communities. In the future, they hope to support initiatives to improve commute times, find additional ways to provide more commuter and business parking in the downtown, continue to expand cell phone coverage in town, support new public-private partnership initiatives, continue to support historic preservation and support senior housing initiatives all while maintaining the character and community that is New Canaan.” 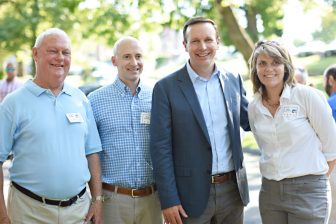 Meanwhile, New Canaan Democrats on Sept. 15 held a successful 16th Annual DTC BBQ at the Carriage Barn Arts Center that drew a wide swath of elected officials in federal and state offices. “First Selectman candidate Craig Donovan and their exceptionally talented slate of local candidates Selectman Kit Devereaux, Board of Education Chair Brendan Hayes, Steven Eno, Robin Bates-Mason, Colm Dobbyn, Mark Grzymski, and more; and this community’s generous support, which made their 16th year an afternoon not soon forgotten,” a press release said. “They would also like to extend their heartfelt gratitude to Walter Stewart’s Market, Musician Nick Depuy, Curbside Compost, Carriage Barn Arts Center, and all of the wonderful volunteers who made the day possible, as well as to the dedicated democrats whose service to this town was honored at Sunday’s picnic. Finally, they would like to offer a round of applause to their fantastic fundraising committee, which continues to amaze with their skill, energy, and heart.”