More than $500 in taxes is owed to the town on a 2009 Porsche Cayenne that’s listed in municipal records as property of Jennifer and Fotis Dulos. The $537.87 total represents two years in back taxes owed on the vehicle, including $83.94 in interest, according to the bill. The vehicle has been noted both in Jennifer Dulos’s divorce filings and police arrest warrant affidavits used to charge Fotis Dulos in connection with her disappearance.

The Board of Selectmen at its Oct. 8 meeting approved a $145 contract with Stamford-based Aavon Pest Control for work around Town Hall. The fee covers maintenance and monitoring of “rodent safety bait stations” and inspecting the parking lot for “rodent burrowing activity.”

A small dog on Frogtown Road was punctured during a skirmish with a pair of coyotes Tuesday morning, according to Officer Allyson Halm of the New Canaan Police Department’s Animal Control section. The Shiba Inu’s owner had stepped inside and immediately heard a commotion outside, and was able to haze the coyotes away, Halm said.

Cava Wine Bar & Restaurant on Forest Street on Tuesday aced an unannounced inspection by the New Canaan Health Department by scoring 95 out of a possible 100 points. Spiga on Oct. 30 scored a 94, and Pesca scored 91 on Oct. 28.

The selectmen during a special meeting Monday appointed Rich Carratu as an alternate member of the Zoning Board of Appeals. The selectmen also voted 3-0 to approve the hiring of Evelyn Martinez as a staff accountant in the Finance Department.

Here are some local events coming up to put into the calendar:

The New Canaan Police Department will host a Tip-A-Cop event to benefit Special Olympics Connecticut at Gates Restaurant on from 5:30 to 9 p.m. on Nov. 12. During the event, local law enforcement volunteers will assist restaurant staff in taking orders and serving customers. All tips the volunteers receive for their efforts will go to Special Olympics Connecticut to support its year-round sports, health and fitness programs for athletes of all abilities.

In advance of 15th Annual Holiday Stroll, the New Canaan Chamber of Commerce has established a charitable foundation that requires donations to fund the approximately $22,000 needed in hardware and manpower to install the LED lights in the trees lining sidewalks downtown. Online donations can be made here, or checks payable to the “New Canaan Chamber Charitable Foundation” can be snail-mailed to the NC Chamber of Commerce at 91 Elm St., New Canaan, CT 06840. 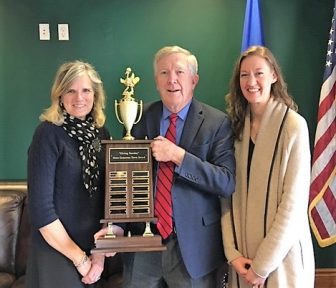 Finally, for the third year in a row, New Canaan and Darien will face off to see who can capture the title of “Most Generous Town” by raising the most funds for either the New Canaan Community Foundation or The Community Fund of Darien. Last year, New Canaan won the competition by a slim margin, and both organizations collectively raised more than $150,000 to support local nonprofits. In the first year, Darien won the competition. This year, the competition window extends from Nov. 21 until midnight on Thanksgiving Day. Donors can contribute to NCCF by texting 06840 to 44321 during this time period or by visiting http://newcanaancf.org. The winning town will own the “Turkey Trophy” and bragging rights for the year, and their residents will take pride in the knowledge that their community makes charitable giving a priority.