The five firefighters that had been in isolation due to exposure to COVID-19 are all healthy and have returned to work, Fire Chief Jack Hennessey told members of the Board of Selectmen Tuesday..

New Canaan Police fielded seven reports of larcenies from motor vehicles in the first two months of 2020, compared to zero in the same period last year, according to data reviewed at Monday’s regular meeting of the Police Commission. Car crashes with injuries increased from four to nine in the same period, data show, while radar-related incidents declined from 173 to 83.

The Town Council on Tuesday voted to reappoint Mike Sweeney and Bernard Simpkin to the New Canaan Housing Authority.

Here’s a CNN video of anchor Brianna Keilar interviewing the Rev. Peter Walsh of New Canaan, who performed last rites over the phone for a local man and parishioner who had contracted COVID-19. 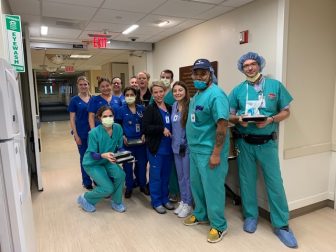 New Canaan’s Alessia Miller—together with Meghan D. Hely Walsh as well as Dana Cifone and chef Stephen Lewandowski of the Townhouse Restaurant in Greenwich—received a great boost in efforts to support her sister, Tania Mariani, an Emergency Room attending physician at Greenwich Hospital. Asked if they would donate food to the Emergency Department staff, New Canaan moms and other residents of the town and surrounding area donated more than $800, according to Miller, and the restaurant matched the donation in food. More than 75 lunches went the ED over the course of three days. Townhouse is part-owned by a New Canaan family.

New Canaan Emergency Management Director Mike Handler during his COVID-19 update Thursday evening referred to a volunteer program designed to help keep seniors and others most at-risk for the virus at home. “To our seniors, please understand that this was not done to take away your freedom, it was done because we greatly value your presence in our community and desperately want to keep you out of harm’s way,” Handler said.

New Canaanite podcast “0684-Radi0” marked one year this month. With few exceptions, the series appears in each Thursday newsletter. Next week’s episode will be No. 50. 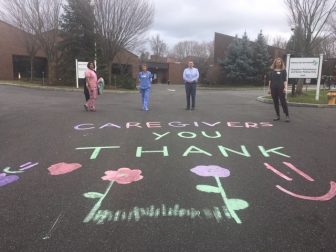 Members of a local Girl Scouts troop, and their sisters, stopped by Waveny Care Center on Wednesday afternoon to show their gratitude to the organization’s hard-working staff, as shown at left.

The first selectman’s office said in a press bulletin that the Family Fishing Clinic scheduled for April 2 has been cancelled, and that the annual George Cogswell Fishing Derby set for April 18 will be rescheduled.