Police at 12:30 p.m. on Oct. 23 received a complaint that the window of a motor vehicle parked in a lot near Mill Pond had been smashed in and a wallet stolen from inside.

First Selectman Kevin Moynihan described his occupation as “elected CEO” in Federal Election Commission donation records. Year-to-date, Moynihan donated a total of $468.75 to the WinRed PAC as well as Donald J. Trump for President and Connecticut Republican Party, the records show. New Canaan’s single largest donor for 2020 is Ronald J. Ulrich at $106,500 to the Republican National Committee, FEC records show. The largest local donor to a Democratic campaign for this year is Daniel O’Keefe at $50,000 to the Biden Action Fund, according to the FEC records.

Craig Panzano, executive director of the New Canaan YMCA, will retire in the spring after 16 years with the organization.

The New Canaan Athletic Foundation is surveying New Canaanites about some of the projects that the organization is considering. They’re seeking input from locals: Share your opinion in this survey.

Multiple police units responded Monday morning to a Briscoe Road home on a “property” call, as listed in the New Canaan Police Department log. Asked about the incident, police said there’s an ongoing multi-town and New York state investigation related to commercial burglaries and that the property is directly related to the crimes. It doesn’t appear that any of the related burglaries occurred in New Canaan itself, police said. The Briscoe Road home is also listed as the address of a residential construction company. 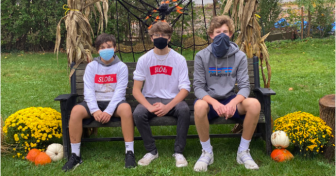 The Service League of Boys or “SLOBs” worked with library volunteers to prepare for the Pumpkin Fest at New Canaan Library (see below).  They cleaned and wheeled pumpkins to help decorate Christine’s Garden, then distributed the pumpkins to local who will carve and return them to be part of the lit display.

A motorist was fined $450 at 11:28 a.m. last Saturday after passing a school bus at Millport and East Avenues.

Waveny Care Center’s short-term rehabilitation received a perfect 3/3 rating from U.S. News & World Report and the Farm Road facility is included in the publication’s new Best Nursing Homes list. Waveny received an overall rating of 4/5 based on data from July 2020 and earlier, according to the U.S. News & World Report. The rating represents “recognition of our professional team’s talent, credentials, and teamwork,” Waveny President and CEO Russ Barksdale said in a press release.

Other noteworthy events coming up:

Noise complaints to New Canaan Police are up about 30% in 2020—from 102 for the first nine months of last year to 132 through this September, according to data shared at the Oct. 21 Police Commission meeting.

Finally, the New Canaan High School varsity football team won its 7-on-7 game versus Stamford High School last Friday afternoon. Here’s a writeup from New Canaan Football: “The New Canaan Rams 7-on-7 football team rallied from an 8-7 halftime deficit scoring 22 unanswered points en route to a 35-16 win over Stamford at Boyle Stadium. New Canaan was buoyed by a stellar defensive effort as the Rams had four interceptions, including a 99-yard pick-six from sophomore Griffin Gentner. Stamford quarterback Joel Mendez hooked up with Marvin Cherry for a pair of scores in a losing effort, an effort that Knights head coach Jamar Greene says will go a long way toward building a bright future when football returns to 11-on-11 full tackle action. ‘It’s great for our young guys,’ Greene said. ‘Most of our kids are sophomores and juniors, so it’s good to get them out here and acclimated to our offense and defense. It’s experience, not 11-on-11, but it’s an opportunity for them to learn.’ New Canaan struck first on the first play of the second quarter, as quarterback Gio Cascione hit Ryan Connelly on a seven-yard score. Stamford countered with the first of the two Mendez-to-Cherry touchdowns. After a successful two-point conversion the Knights took their only lead of the game, 8-7. The Rams had two scoring drives in the third quarter, extending to a 21-8 lead heading into the fourth. Stamford was poised to cut into that lead with a long drive to the New Canaan five-yard line when Gentner stepped in front of a Mendez swing pass intended for Jordan Besard at the goal line and ran untouched to the end zone, giving the Rams a 29-8 lead with 11:57 left to play. After Stamford scored to make it 29-16, Cascione hooked up with Hunter Telesco for a 60-yard touchdown and a 35-16 lead that held up as the game’s final score.”