New Canaan Police are investigating a bicycle reported stolen at 7:10 p.m. Monday from the Thrift Store at Locust Avenue and Main Street. 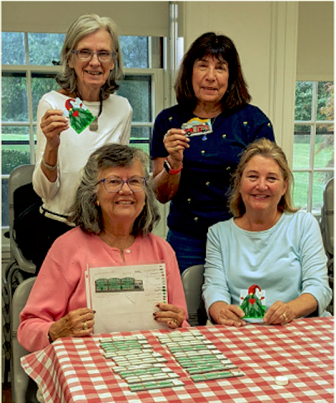 Orders are open for this year’s New Canaan Ornaments, celebrating local heroes of the COVID-19 pandemic. Designed by ornament co-chair Faith Kerchoff and cut by her husband, John, they depict: 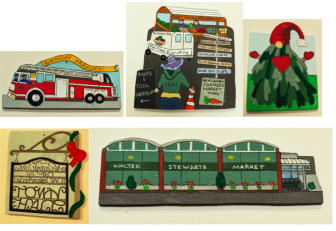 The 2021 New Canaan ornaments can be ordered now. Contributed

They can be ordered by using this form for November pickup. Proceeds benefit the New Canaan Museum and Historical Society. The ornaments will also be available at the Farmers Market in the Lumberyard Lot on Nov. 6 and 13.

A car key found near an Elm Street lingerie and swimwear shop around 5:35 p.m. Sunday was turned into property management at the New Canaan Police Department. 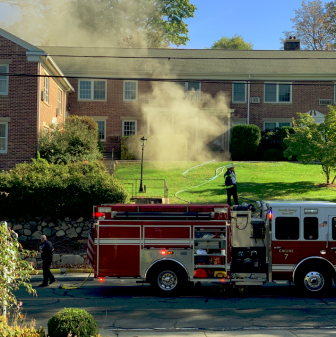 Firefighters respond to 190 Park St. on Oct. 21, 2021. Photo published with permission from its owner

New Canaan firefighters at 10:56 a.m. Thursday responded to a two-alarm fire in a rear unit at the Park Mead Condominiums, a complex located north of the intersection of Park and Mead Streets. Norwalk and Wilton firefighters helped cover New Canaan while NCFD had four rigs at the scene.

The new Soundview Lane cell tower is up and AT&T is expected to go live on it some time in November, with Verizon to follow, First Selectman Kevin Moynihan said during Wednesday’s Town Council meeting. An application for another proposed cell tower, near the intersection of Ponus Ridge and Dan’s Highway, is expect to go to the Connecticut Siting Council early in 2022, he said. “We will have other positive news very soon about other towers and other locations,” Moynihan said.

The Conservation Commission on Monday opened the new raised walkway in Bristow Park. First Selectman Kevin Moynihan Public Works Director Tiger Mann were on hand for the opening, part of a master plan for Bristow to mark its centennial in 2024.

A special joint meeting of the Boards of Selectmen and Education has been scheduled for 8 a.m. Friday to appoint someone to fill the remainder of Carl Gardiner’s two years on the school board. The Republican resigned effective Oct. 1 because he’s moving out of state.

New Canaan’s Cathy Kangas, a member of the Board of Directors of the Human Society of the United States, shared in a Tweet on Monday that the organization is suing the world’s largest pork producer for misleading consumers about animal abuse in its supply chain. Kangas founded PRAI Beauty, a cruelty-free, targeted skincare company.

The selectmen voted 3-0 Tuesday to approve the hiring of Jeff Mannella as an equipment operator in the Department of Public Works. 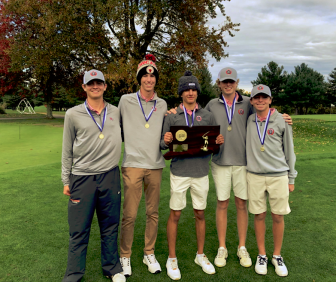 Congratulations to legendary head coach Bill Brown and the New Canaan High School Boys Golf Team. The Rams won the Division 1 state championship on Monday, finishing two strokes better than runners-up Glastonbury. This was the 11th state crown for Brown in his storied career. New Canaan was led by seniors Sam Funk who shot a 73 and Marc DeGaetano who finished at 79. Juniors Sean Watchmaker and Cullen McCarthy shot an 81and 83 respectively while senior Taylor Pinkernell came in at 84.

Police at 8:45 a.m. on Oct. 15 arrested a 32-year-old Springfield, Mass. man by warrant and charged him with first-degree failure to appear. They had been dispatched to an Adams Lane residence regarding an unknown man walking around the property and discovered that Milford Police had a warrant out for him. He’d been arrested in April and charged with criminal trespass and burglary, Connecticut Judicial Branch records show. 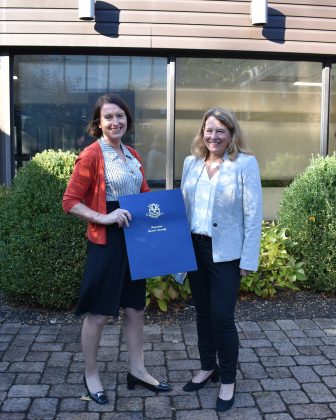 The National Charity League’s New Canaan Parish Class of 2022 and their grade level advisors Camilla Austin and Kristin Reed thanked New Canaan Police Department Officer Kelly Coughlin, who recently discussed avoiding conflicts (“run, hide, fight”), the importance of being aware of one’s surroundings and texting 911 with the organization. She also taught and demonstrated important defense moves to college-bound seniors in  the NCL class. “We feel very lucky to have female officers who care about our daughters and act as excellent role models for them,” they said in a statement.

New Canaan’s Chase Williams co-authored a news story published on Fox Business last week that includes an interview with Nick Martschenko, owner of The South End and other local restaurants 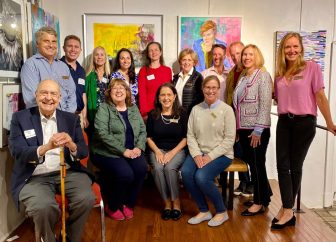 The New Canaan Chamber of Commerce will host a Halloween Block Party on Elm Street from 12 to 2 p.m. on Sunday, Oct. 31. Children are invited to trick-or-treat along Elm and the whole family is invited show off their costumes. New Canaan School of Rock will be performing and there will be appearance from New England Academy of Dance and the cat of New Canaan High School’s “Freaky Friday.” This event is free to the public generously sponsored by Walter Stewart’s Market.