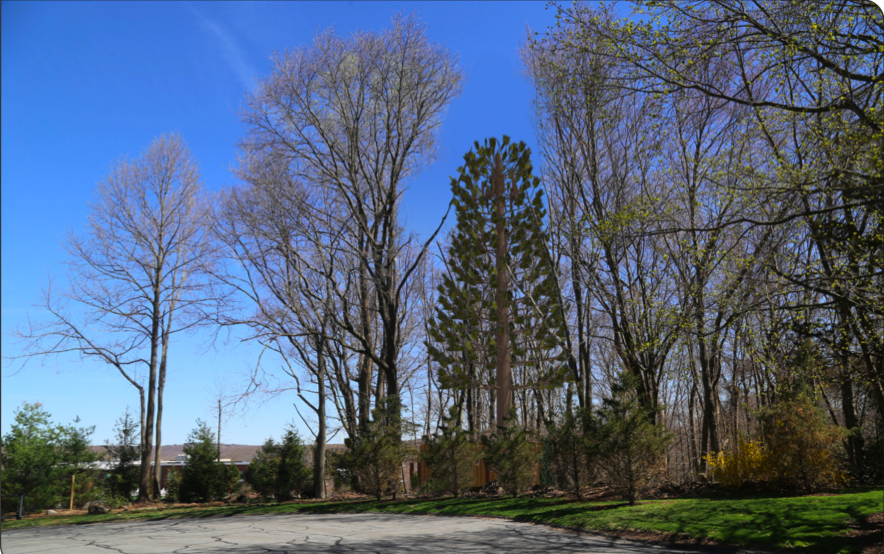 Construction of the 85-foot, stealth “tree” monopole at 183 Soundview Lane could start in December or January and should take about 40 days, according to property owner Keith Richey. The Connecticut Siting Council on Wednesday published its Sept. 24 decision in favor of an application filed on Richey’s behalf by Homeland Towers LLC.

“We are grateful that the CSC approved the application of Homeland Towers and AT&T inasmuch as my wife and I have been through a lot the last three years,” Richey told NewCanaanite.com in an email.

“The CSC application process itself has taken around two years.  We believe that better cell service is important. Our property is uniquely situated with elevation (over 500 feet) and isolated at the end of a cul-de-sac, making it an ideal site for a cell tower. After months of arduous negotiations through the end of 2017, we were able to successfully get agreement for a monopine design tower height of only 85 feet plus five feet for additional concealment material at the top. The faux branches will extend down to 20 feet above the ground. So, no ugly toothbrush like on the Hutchinson River Parkway. After the cell tower is installed and the screening trees are planted, our neighbors will see how innocuous and inconspicuous the tower and compound are.”

Final planting plans are under development, he said. Though AT&T was the formal co-applicant for the tower, Verizon indicated subsequently that the company also would use it, according to documents in the Siting Council file.

New Canaan for years has sought to address large “dead zones” of cellular coverage. In 2017, proposals brought forward by a now-disbanded municipal body, the Utilities Commission, to place equipment on public property such as Irwin Park and West School, met with intense criticism from residents. The Soundview Lane tower is expected to improve coverage in the northeast quadrant of town, and town officials have said they’re working on a plan to do the same in the northwest.

Richey made public in early-2018 his plans to raise a tower on his own property at the end of the cul-de-sac, stirring wide discussion in town and drawing opposition from some neighbors. One year ago, First Selectman Kevin Moynihan received an attorney’s letter saying that AT&T had signed up as a carrier whose equipment would go onto the proposed tower. That triggered an application process outlined in state statute, requiring input from the town or city where a proposed tower would go.

Those weighing in included New Canaan Planning & Zoning. The P&Z Commission in 2018 adopted new regulations that, among other things, “strongly encouraged” private property owners applying to the state like Richey has to meet with the appointed body to review plans (see page 166 of the town’s Zoning Regulations). Moynihan in a July 2 letter to the Siting Council said the proposed Soundview Lane tower was “critically important to improving our telecommunications service for over 1,000 families for public safety reasons.”

One objecting neighbor, Hugh Wiley, of 173 Soundview Lane, said he would have a “direct line of sight to the proposed tower from our driveway, front yard, front windows, side and rear yards, and swimming pool.”

“My wife and I are gravely concerned that construction of the proposed tower will adversely affect the natural and rural character of our neighborhood, which is a quiet and serene four-acre subdivision with abundant plantings, trees and wildlife,” Wiley said in pre-filed testimony that forms part of the Siting Council file.

“We are also extremely concerned that the construction of the proposed tower will have a significant negative impact on the value of our property, making it difficult and perhaps impossible for us to sell at a reasonable price,” he said. “I have discussed this issue with experienced New Canaan realtors and have been advised that, although difficult to quantify, if constructed, the proposed tower will have a significant adverse effect on the value of my home.”

Yet, the Siting Council said in its decision that “the effects associated with the construction, maintenance, and operation of a telecommunications facility … when compared to need, are not in conflict with the policies of the State concerning such effects, and are not sufficient reason to deny the application.”