New Canaan High School senior Will Hetherington jumped into action on Sept. 25, and rescued two young girls caught in a submerged vehicle during the heavy rain storm and flash flooding that took place that day throughout the area. 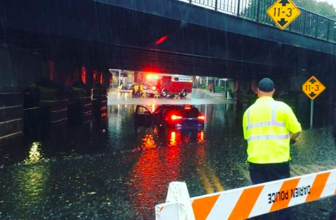 Flooding on Route 1 in Darien at the railroad underpass. Photo courtesy of the Darien Police Department

Hetherington, who’s been a volunteer fireman for the Darien Fire Department since he was 17, was on duty when, at approximately 4:30 p.m. that Tuesday, the DFD got a call for a car and water rescue. A Jeep Cherokee with three young girls, aged 6, 8 and 12, and their grandmother, was submerged under the Tokeneke Railroad Bridge in Darien, with flooding waters reaching half way up the car windows. Hetherington was on the rescue truck that was dispatched, and he volunteered to suit-up, donning a yellow waterproof rescue outfit, known as a “mustang suit.” With DFD safety officer Andy Malowitz, Hetherington approached the trapped family’s vehicle. They decided not to break any windows but were able to pull the young girls from one of the slightly open car windows. Hetherington rescued two of the girls, putting each on his shoulders and carrying them to the firetruck, handing them off to Lorin Treglia, another DFD volunteer. He and Malowitz returned to remove the grandmother, who had an injured foot, which restricted the rescue effort. They eventually were able to pry open the driver’s door and remove her from the vehicle, carrying her to the firetruck. 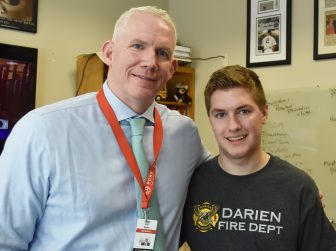 “The courage Will displayed during the rescue is without question,” said NCHS Principal Bill Egan. “We are proud of his actions on September 25th and happy to be able to share his story.” Hetherington is one of New Canaan High School’s Students of the Month for October 2018, a monthly program in which two students from each year at the high school are recognized with a hallway plaque. —Mike Horyczun

The town is focusing now on installing a 110-foot-high cell tower on a strip of land off of Ponus Ridge above Dan’s Highway that’s located mainly in a town-owned right-of-way, First Selectman Kevin Moynihan said during a media briefing Thursday. Nearly all of the approximately 15- to 20-foot-wide property is owned by New Canaan, with a small portion owned by Aquarion, he said. It’s located near the Laurel Reservoir and Dantown, “The Atlantis of New Canaan.” 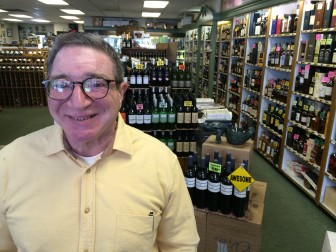 Police at 5:55 p.m. Monday cited a 23-year-old Norwalk man for possession of less than .5 ounces of marijuana after stopping his car on White Oak Shade Road for having an “aftermarket” window tint that did not display a DMV inspection sticker.
***

It’s been exactly one year since NewCanaanite.com started requiring full and verifiable names from those submitting comments to the news site. Since making the change, we’ve published 1,356 comments, or about 3.7 per day.

Some big breaking news out of the “new look” Walter Stewart’s Market, New Canaan’s family-owned grocer for more than a century:

Our salad bar is open! Lisa is ready to serve you a fresh-prepared salad made to order! @WalterStewarts has so many fresh meal options! https://t.co/XAn2Pewh9g

From NCHS Athletic Director Jay Egan, regarding Saturday’s football game versus Greenwich: “There is a great deal of interest in Saturday’s football game between Greenwich and New Canaan. Both teams have great fan bases and generally draw large crowds to important games. Dunning Stadium can safely hold approximately 3200 spectators. To be sure you can get into the game you are strongly encouraged to purchase tickets online. Online ticket sales will end at 8 p.m. Friday. At that time we will evaluate how many tickets have already been sold and determine how many tickets can made available at the  gate on Saturday. Tickets the day of the game will be limited. All student and booster passes will be honored.”

The town is about to focus on improving amenities at Talmadge Hill Train Station, according to Moynihan. As it stands, the station has no canopy, coffee or warming places. 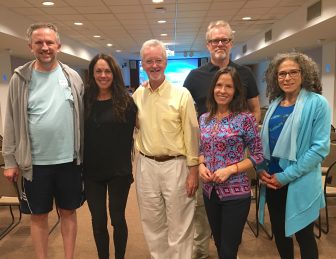 Erika Long and Michelle Seaver, two of the co-founders of Community Mindfulness Project, led a workshop on Mindful Listening + Mindful Speaking at New Canaan Library on Sept. 30. Through a lecture complemented by interactive speaking and listening sessions, the workshop provided individuals with tools to help manage the discussion of emotionally charged topics or differing opinions with family, friends, neighbors or co-workers. The core message emphasized that Mindful Speaking and Listening empower us to be able to speak openly with and hear each other, even when we don’t agree.

During the month of October, Pryority Wellness founder Julie Pryor and associates will be offering workshops and lectures on breast health topics that include thermography, at-home self care practices, lymphatic focused regenerative therapy and a new FDA approved solution called Synergie, which helps with lymphatic circulation and detox treatment. To kick off Pryority’s focus on breast health, Rachel Mazzarelli, MS CCT, will be conducting two free workshop sessions on the benefits of thermography at Pryority Wellness from 9:30 a.m. to 12:30 p.m. on Tuesday, Oct. 9. A certified clinical thermographer with a masters degree in clinical nutrition, Mazzarelli has been studying the benefits of thermography for more than 10 years. 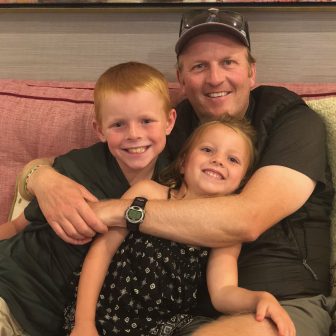 Dave Burns with his kids Andrew and Eloise. Contributed

1994 NCHS graduate David Burns, beneficiary of a life-saving liver transplants three years ago, is participating in this year’s “Liver Life Walk” for the American Liver Foundation. 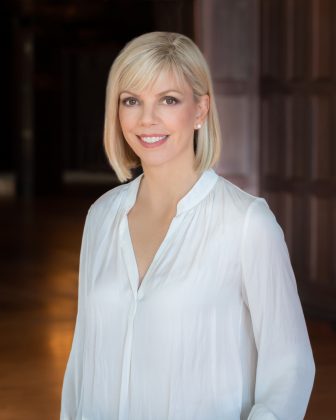 Nicole advises families throughout the United States with students seeking admission to college. She graduated with honors from Northwestern University with a major in communication studies and with distinction from UCLA’s College Counseling Program. Educational Futures helps young people who wish to continue their education in a secondary school, college or university in the United States, Canada or Europe.