New Canaan Police are investigating the theft of two diamond rings valued at $30,000 and $20,000, and a gold wrist band valued at $2,000, from an Elm Street jewelry store. Reported at about 1:42 p.m. on March 12, the thefts occurred during normal business hours and are considered a “distraction-type” larceny, police say. 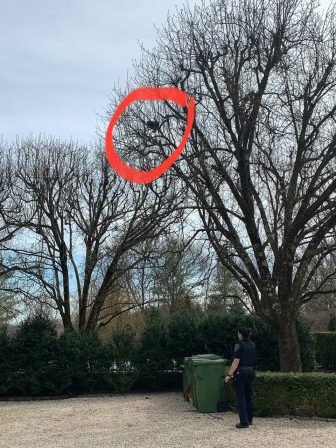 New Canaan Police Officer Kelly Coughlin on scene March 15, 2022, at a Brushy Ridge Road property where a woodchuck was chased up a tree, as indicated by the circle. Photo courtesy of NCPD

Police on Tuesday morning responded to a call about two golden retrievers who had chased a woodchuck up high into a tree on Brushy Ridge Road.

Congratulations to New Canaan residents Meghan Walsh Cioffi and Robert Cioffi, who will receive honorary degrees at the University of Vermont commencement next month.

An archive of videos of public government meetings in New Canaan that had gone back several years has been removed from the website of local cable access Channel 79. 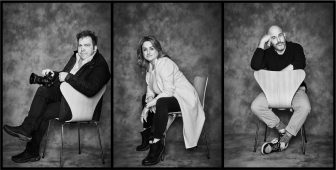 Name a chair in the new Jim & Dede Bartlett Auditorium at New Canaan Library—details of The Chair Project here.

Congratulations to swimmer Kate Douglass, granddaughter of New Canaan’s Ed Vollmer, on swimming the 50 freestyle of all-time Thursday during the Women’s NCAA Championships—a 20.87, breaking the previous NCAA, American and U.S. Open Record of 20.90, set by former University of California star Abbey Weitzeil in 2019:

Get in while you still can: “Through Our Eyes X,” the 10th annual New Canaan High School exhibition, runs through March 19 at Carriage Barn Arts Center. It will feature selected work from NCHS alumni artists, as well. More information is available here.

Police are investigating a report, received at about 10:39 a.m. on March 15, regarding items taken from an employee storage area at a Main Street business.

New Canaan’s own Andrew Armstrong, artistic director of New Canaan Chamber Music, is putting on a concert to be held at 5 p.m. on Sunday, March 27 at First Presbyterian Church of New Canaan. Click here for ticket info.

The New Canaan Beautification League’s annual appeal is underway and runs through March.

Melissa Riley has been named brokerage manager for the New Canaan brokerage of William Pitt Sotheby’s International Realty. The Ridgefield resident three years ago started the Ridgefield Women’s Entrepreneur Group to coach female business owners and build all facets of their businesses, according to a press release. 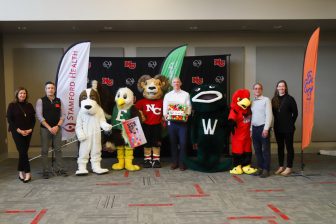 The NC Color Drop will take place at 10 a.m. March 26 in Waveny. A Bell407 helicopter, courtesy of HeliNY, will once again fly over the skies of New Canaan and hover over the park, safely releasing close to 2,000 colored golf balls over a designated target—100% of the proceeds will be donated to the NCHS Scholarship Foundation for need-based scholarships given to NCHS graduates. Purchasing a ball gives the donor a chance to win a prize and the opportunity to be present at the event in Waveny Park. Details here.

Police in February increased the department’s number of location checks to 407, more than quadruple the number from the year-ago month (101). The substantial increase is due to a rise in officers’ checks in the center of town and other areas of New Canaan, in an effort to thwart those coming here to steal from motor vehicles, steal cars and otherwise target public parks and residences, Police Chief Leon Krolikowski said during Wednesday’s Police Commission meeting.

Finally, Silvermine Arts Center’s annual Instructors Exhibit is open through April 14 at in the Silvermine Galleries. “In this centennial year for Silvermine, new work by the instructors shows a wide range of innovative approaches to painting, drawing, ceramics, photography, sculpture, mixed media, and printmaking,” a press release said.