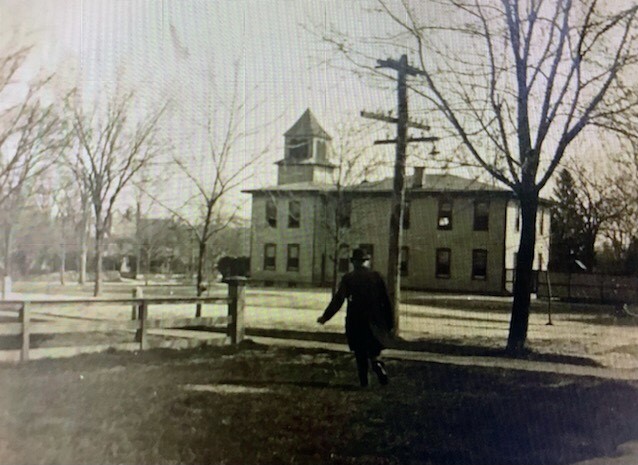 The original Center School was a wood structure that faced Maple Street. This photo, from South Avenue facing northwest, is courtesy of the New Canaan Museum & Historical Society

Starting in 1795, classes for New Canaan’s School District No. 1 were held in a converted blacksmith’s shop on Park Street near where 63 Park Street now stands. Classes were then held in what is now 40 Seminary Street, but this building also proved to be inadequate. Eventually in 1853, a new school building was built on  the east side of Park Street somewhere between Cherry and Elm, but  before any classes could be held there, it burnt down. So for two years, classes were held in the Town House located at 13 Oenoke Ridge and is now the headquarters of the New Canaan Museum. 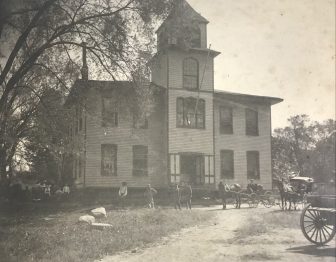 Center School ca. 1909. A caption on the photo says that men are “moving the Old School House to make room for the new brick school house.” It faced Maple Street. Photo courtesy of the New Canaan Museum & Historical Society

Finally in 1855, Center School was built on the corner of Maple and South Street.  Originally the building was a simple 2 floor square  wooden structure with a cupola on the center of the roof for the bell. Even though the building was designed to hold 180 students, it was still by far the largest school building in New Canaan. All other ten schools were simple one room buildings, but the size of Center School did not mean that the education at Center School was any better. Students from the ages of six to sixteen were taught subjects such as spelling, arithmetic, history, and philosophy. The students’ parents had to provide the supplies for the classrooms along with the textbooks, but the parents also elected the teachers each year. Each classroom was heated with its own stove (steam heat had been voted down as being too expensive) and its own water pail and cup for drinking until running water was installed in 1893.  By 1894, enrollment had reached 240 students. This warranted the addition of four more classrooms to the front of the building along with a belltower. In total these improvements cost $2,500, which were seen as too extravagant in the eyes of many in town. This building with all of its alterations can be seen in the above picture that was taken sometime around 1900.

However in 1908, it was clear that an entirely new school building was necessary.  Instead of  buying a new piece of land and building the new school there, the old wooden building was moved back a few hundred feet allowing for the new school to be built while classes continued. By this point, attitudes in town around spending money on education had changed and $45,000 was set aside to build a new Center School. In 1910 when the new brick Center School (complete with future knockout pit) was finished, the old wooden building was auctioned off to B.P. Mead for $395, who tore it down within a week. With a few additions in 1918 and 1940, the new Center School served the town until it was torn down in 1984.