On his last day as a pediatrician in New Canaan, Dr. Harrison Pierce said he saw a large number of children, four of whom were “second-generation” patients. 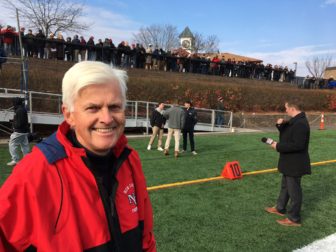 Yet within hours of retiring, Pierce’s daughter Tara Clough—a 1993 New Canaan High School graduate—called to ask him to check on her own daughter, who had been sick that very night.

“I thought to myself, ‘Am I really not going to be caring for sick children anymore?’ ” Dr. Pierce said. “It’s a change, but that showed me I still have things to do.”

A fixture since 1975 at the East Avenue doctors’ practice known today as the New Canaan Medical Groups, Dr. Pierce has served as primary care physician to generations of local kids, forging bonds with families here and, through his office as well as wider community involvement, leaving an indelible mark on the town.

A New York City native who earned his bachelor’s degree from the University of Notre Dame in 1965 and medical degree from the University of Rome in 1970, Pierce completed his internship, residency and fellowship at New York Medical College and came to New Canaan in 1975. There, Dr. Pierce would enter a profession that he refers to as a “vocation” rather than a career. He retired in December, as announced over the PA by Bob VanDerheyden, “Voice of the Rams,” at the Turkey Bowl.

“I think I actually did what I was supposed to do,” Dr. Pierce wrote in a letter to his patient families.

Arriving in New Canaan, he joined a practice that included Dr. Thomas Flynn and grew to become an integral piece of New Canaan and dedicated family physician. He was the town’s director of health from 2001 to 2003, and could be seen on the sidelines of Dunning Field during the New Canaan High School football season, alternating with Dr. William Flynn as athletic department physician.

A father of three (Tara, Harrison and Cecily), Dr. Pierce will continue as medical advisor to the New Canaan Public Schools, New Canaan Country Day School and St. Aloysius School, which requires keeping in “constant communication” with school nurses and occasional visits to the schools for consultations.

“There are two sides to it. I’ve really enjoyed pediatrics, but at a certain time you feel a little older and are affected by the demands of working nights and weekends.”

Those demands have been substantial.

Before the New Canaan Medical Group had a third partner, Pierce said he was on call every other night and every other weekend. That schedule nearly always required him to go into the office, with Sunday mornings as the busiest after-hours time, he said.

In recent weeks, Dr. Pierce said he’s had flashbacks through the years of checking up on local kids with their families, diagnosing what ails them and treating those illnesses.

“One thing that did hit me at the end was what parents, especially the mothers, do for their children on the special needs spectrum,” he said. “It’s amazing what they do. Saying ‘Goodbye’ is when it really hits you.”

Moving forward without such a packed schedule, Dr. Pierce said he plans to spend more time with his wife, Maggie, and to travel and visit friends on both coasts. Since Pierce’s retirement, a new pediatrician joined New Canaan Medical Groups. In the letter, Pierce describes Dr. Maria Ieni as an “outstanding physician and person.”

Pierce said he recognizes that his retirement impacts his life as well as the lives of New Canaan families accustomed to seeing their longtime physician.

“You get attached to families, and they rely on physicians, so it’s a change for them and a change for me,” Dr. Pierce said. “In my letter, I used the words ‘retire’ or ‘transition’ because I didn’t want to say goodbye. It becomes part of your DNA.”