New Canaan resident Tom Butterworth is seeking the endorsement of the Republican Party for re-election to the Town Council. We put some questions to the incumbent about his candidacy. Our exchange follows.

New Canaanite: Tell us about yourself—how long have you lived in New Canaan, what have you been involved with here in town and what led to your decision to seek re-election? 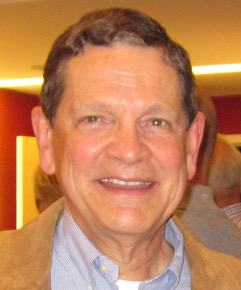 Town Councilman Tom Butterworth is seeking the Republican Party endorsement for re-election to the legislative body at the July 20 caucus. Contributed

Tom Butterworth: My wife Libby and I have lived in and loved New Canaan for over 30 years. Currently I’m proud to serve on the Town Council, I’m chairman of New Canaan Chamber Music, and I’m an active member of the Rotary Club. In past years I have directed and performed in The Gridiron Club Show, I’ve been involved extensively with the Town Players of New Canaan, and with Libby I restored the oldest house in New Canaan. In my “breadwinning” years I practiced law, served as a management consultant, and later worked as a financial planner. I’m running for re-election to Town Council because I’m a sucker for a good cause, which is what I consider New Canaan to be.

What have been your biggest contributions to the elected body/office for which you are seeking GOP endorsement at the July 20 caucus?

For four years I have served as Town Council liaison to the Board of Education. In that capacity I have attended several dozen BOE meetings and have come to know the leaders and policies that have caused our schools to be among the best in the nation. Because the quality of New Canaan’s public schools is our citizens’ top priority, I have been a strong and vocal supporter for the funding needed to keep them great. I also serve on the Town Council Committees for Health & Human Services, Infrastructure & Utilities/Public Works, and Bylaws & Ordinances. I drafted the ordinances the Town Council adopted to deal with carry-out shopping bags and blight prevention.

What is your vision for the elected position/body for which you are seeking re-election?

The performance of New Canaan’s schools, town government, nonprofits and families over the last 16 months has been exemplary and heroic. In the face of a devastating pandemic, we cooperated, we adapted, we innovated, we inspired, we protected one another, and while we suffered many tragic losses, we survived, and we thrived. And, not for nothing, we emerged so strong financially that we’re prepared to solve our greatest challenges. So, when asked about my vision for the next Town Council, my response is that we must not blow it. We won’t blow it if we embrace the values that helped our town thrive for the last 16 months.

[Editor’s Note: Through July 9, NewCanaanite.com is publishing Q&As with local Republicans seeking party endorsement for elected offices in contested races at the July 20 GOP caucus. We will publish letters of endorsement for the Republican caucus and Democratic endorsement meeting through July 9. Comments are disabled on this post.]