The Planning & Zoning Commission on Tuesday approved plans that will allow Dunkin Donuts to move across Elm Street, to a commercial space next to The Playhouse. 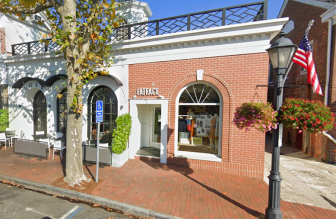 The owner of 105 Elm St., formerly Fatface, is preparing the commercial space for Dunkin Donuts. Streetview

Currently located at 88 Elm St., Dunkins is to move to the far side of the midblock crosswalk to number 105, according to a site plan application filed with the town.

The “new” Dunkin Donuts will have an updated look and more room for customers, according to James Cain, representing the applicant.

“It’s basically just a nicer, upscale design,” he told members of P&Z at their regular meeting, held via videoconference.

Under the New Canaan Zoning Regulations, permitted uses for properties in the Retail A Zone with site plan approval include “[r]estaurants, excluding any designed or intended in whole or in part for food service to, or consumption by, patrons in motor vehicles on the premises” (see page 73 here). The site plan application itself calls for an interior fit-out for the donut shop, including bathroom, floor, equipment and wall covering work.

Currently vacant, the commercial space at 105 Elm had been home to Potpourri Designs, which closed in January 2019. Later in 2019, United Kingdom-based clothing retailer FatFace had a short stint there.

It wasn’t clear when the move would occur.

Commissioners asked whether the “new” Dunkins would be on one or two floors (one), whether a stairway on the plans would be used (no it’s a back stairway that is not accessible to the public), whether a side door could help meet ADA standards for accessibility (no, a ramp will be used in the front for ADA access) and whether traffic problems are anticipated (no, it’s the same area as where Dunkins is now).

Casavant in recommending the approval said, “I think it’s a good idea to get a better, ADA-complaint Dunkin Donuts across the street.”

5 thoughts on “Dunkin Donuts To Move Across Elm Street”