On a recent, overcast evening Newcanaanite.com sat down with rising NCHS senior Emily Azzarito in front of Starbucks to talk about her life and musical career. See below for the entire transcription of our interview. 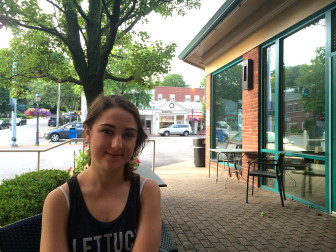 Rising NCHS senior Emily Azzarito sits down with us in front of Starbucks in this edition of Faces of New Canaan. Credit: Alex Hutchins

NewCanaanite: When did you start playing music?

Emily Azzarito: I started playing—well, my mom would want me to say I started music lessons when I was three or something because she thought it was a good idea to put me in this music program with other three-year-olds. It’s called Kindermusik which is this program for little pre-schoolers where you learn to just clap. And my mother swears that’s the reason I’m like this great musician.

Was the cello your first instrument or did you start with something else?

I started playing cello when I was in third grade. But, technically I had a keyboard in my room that I would always just make things up on informally a couple years before I started real music lessons on the cello.

Does anyone else in your family play an instrument?

Not really, no. I mean after I started playing my brother did pick up a little bit of guitar. He’s pretty good actually.

Is he in college?

University of Miami in Florida. He’s working for Ford now as an engineer which is very cool. But yeah, other than my brother picking it up after I did, nobody plays an instruments.

What sort of music groups have you been in … since Kindermusik?

A lot. Let’s see, I’ve been doing Norwalk Youth Symphony which is an awesome organization. They have about four or five separate ensembles starting with beginners then you move up as you get better and older. I am now in the very top group which is the Principal Orchestra and I am first chair in that which is pretty sick. But it’s an awesome organization and I’m also in—what I was doing all day today and for the past two weeks—my string quartet. It’s basically just four young musicians from four different towns: Darien, Norwalk, Westport, and New Canaan. We’re all best friends, we’ve been together for five years and we love playing together.

What do you enjoy about playing with other people who take music as seriously as you do?

Well, it’s sort of just a higher level of communication I think. There is something sort of special about not only knowing that someone is just as committed and interested in music as you are, but also that they are very skilled at reading music and knowing how to convey it just the way you strive to. It’s very amazing to be in people’s presences like that. Yeah it’s a very special relationship to have. It’s sort of about non-verbal communication.

So do you communicate through your music?

Absolutely, it’s like you can’t really describe it, but yeah. It’s weird but cool at the same time.

What made you want to stick with the cello and music in general?

I don’t know I guess it never crossed my mind to stop for any reason. It was like I was on this train or this snowball that was just rolling down the hill and I never wanted it to stop, never wanted to get off the train.

Thanks. I don’t know, I met so many friends through it. Some of my best friends are at the Norwalk Youth Symphony, so I look forward to going every weekend to rehearse with them because it’s just fun.

Does school ever play an impact on practice times or anything?

School is an issue only because it eats up a lot of hours out of the day. Not only just being at school but homework as you know is just—

Yes, brutal. And practicing during the year, especially weekdays, is really tricky because I’m supposed to be doing upwards of three hours a day but it practically doesn’t happen most of the time.

That was insane. It was actually my second time playing there. It was just this May actually.

When was the first time?

The first time was eighth grade.

Yeah I felt pretty cool but I was like seventh chair sort of towards the middle/back section. A lot of much better performers were sitting in front of me for me to look up to but it’s a very different experience going to Carnegie Hall as the first chair. I had a whole bunch of solos. We played Scheherazade which is one of the most insane symphonies ever.

It sounds insane based on the name alone.

It sounds insane. It’s literally about oceans and crazy, I don’t even know what. But yeah I had several solos where no one in this 70-piece orchestra was playing besides me on this massive stage in front of this massive audience. It’s just like an out-of-body experience.

Would you say that was your greatest performance?

Yeah it’s definitely up there. I was shaking all over and sweating like a pig but yeah it was amazing.

What sort of music do you like to listen to? Do you ever listen to classical music?

That’s a good question. I really, I don’t listen to much classical music. I listen to the pieces that I have to play because it helps you get an understanding of it. Other than that, oh my gosh, I listen to a lot of hip-hop, R&B, EDM, electronic weird stuff.

Would you say you have a favorite artist? Or someone that you’ve listened to a lot this summer?

I have no idea, I’m so all over the place. Anything interesting or weird really.

So do you see yourself continuing to play music in college and beyond?

Yeah, that’s sort of what I’ve been thinking about just with applications and everything. I’m looking for basically a big liberal arts college. So I’m not applying to any conservatories which is what a lot of my music friends would be doing which is basically you go for your four years and you sit in a tiny little practice room for 8 hours a day and just practice so music is all you really do. Because I have so many other interests, I’m definitely going to study music but I might do a double major like cello performance with economics or something practical, like real-world oriented. But yeah I’m definitely going to keep up with it.

So other than music, what are some activities or interests that you have?

That’s a good question. I don’t really play any sports so you can cross that off the list. I do like yoga and I’ve started doing Pilates which I totally love. I really like cooking if that counts. I’m vegetarian, I have been for four or five years so I do a lot of my own cooking and baking and other fun stuff like that.

In a few sentences can you describe what music means to you?

Music is like taking what some guy, 200, 300, 500 years old wanted you to project into the world and interpreting it in a way that not only represents him well but also represents you as an individual just as well and becomes pleasing to an audience. It’s a lot of creativity and a lot of respect and reverence for composers who were way better than you and kind of serve as God-like figures. It’s creative and fun and awesome.