After some 40 years on Elm Street, high-end clothing shop Family Britches on Wednesday will open in a new location at 99 Main St. in downtown New Canaan. 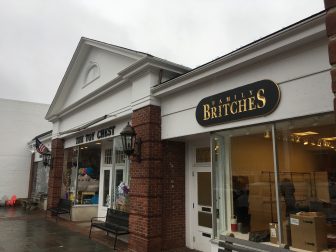 Family Britches has moved into 99 Main St. in New Canaan after 40-plus years at the store’s Elm Street location. Credit: Michael Dinan

The store will drop its women’s wear business, which its had for about 20 years, and “go back to our roots, which is just a men’s store,” longtime manager Mark Gust told NewCanaanite.com.

“The location we had is just way too big, so we wanted a little bit more intimate setting in a highly trafficked area, and we found this spot,” Gust said as he and others moved merchandise into the new space, formerly occupied by Candy Nichols and long ago, locals will remember, by Gramophone Video.

Family Britches had been on Elm Street since the space had been a restaurant, notably the iconic Pierre’s or “Izzy’s Place,” as it commonly was known that operated there from 1944 to 1976.

Gust confirmed that Family Britches was dropping its women’s wear business because New Canaan now offers so many options along those lines.

Asked how he feels about the new location, Gust—a Family Britches employee for 47 years, in New Canaan for 41—said, “Very excited.”

“Menswear is my passion,” he said.