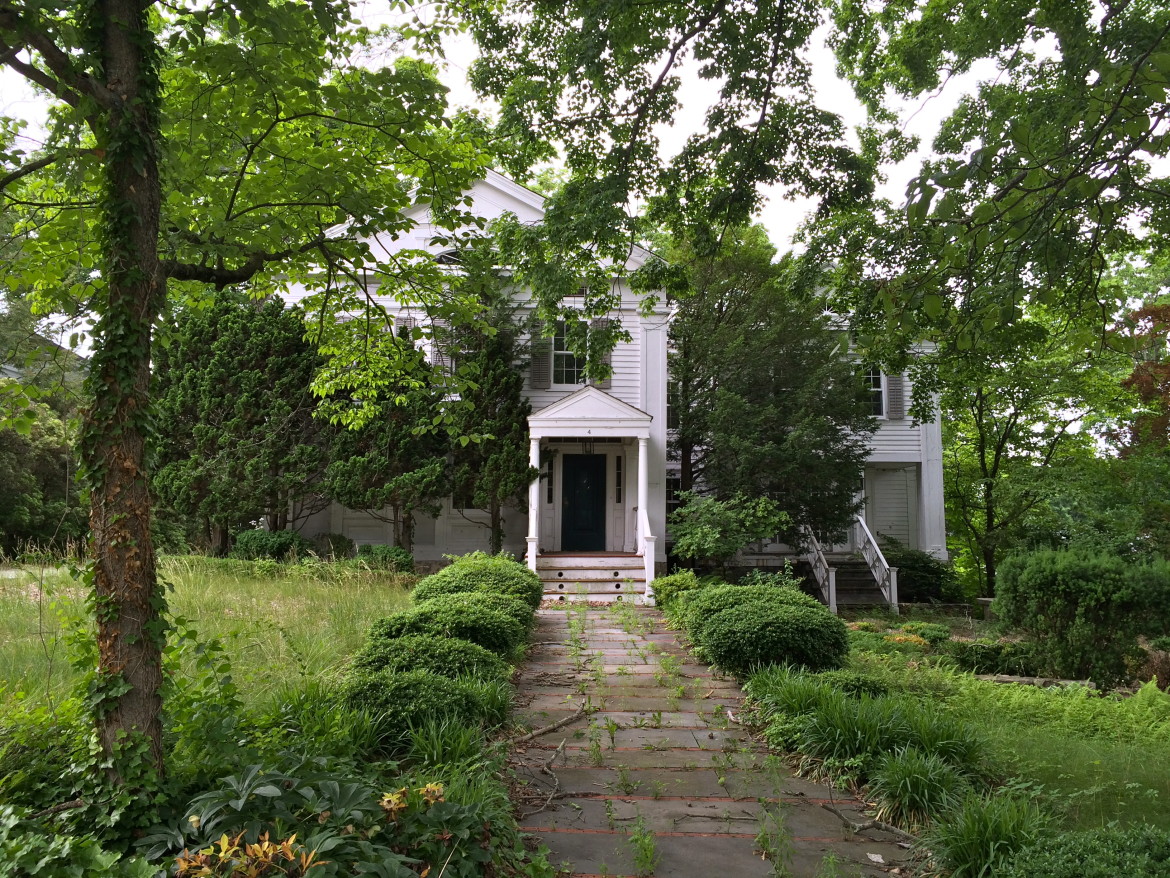 The town has received a formal letter of objection to the planned razing of an antique house on God’s Acre, triggering the possibility of a 90-day demolition delay. 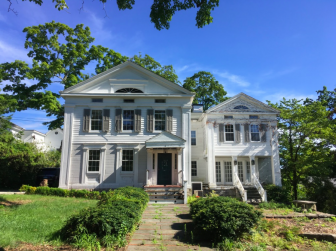 The left side of 4 Main St. in New Canaan is original. the thing on the right is not. Credit: Michael Dinan

The owners of 4 Main St. on Sept. 26 applied for a permit to take down the long-neglected structure, with a plan to replace the Greek Revival’s original street-facing facade with a replica that’s slightly larger in scale.

Because the structure is located in the Historic District, its demolition must be approved by the Historic District Commission, by local ordinance as well as state law. Under the Town Code, a “pertinent written objection” to the demolition, filed with the chief building official, triggers a meeting of the Historical Review Committee. That Committee then is to meet within 15 days to determine whether the structure has “historical, architectural or cultural significance,” and if so, may issue the 90-day delay. 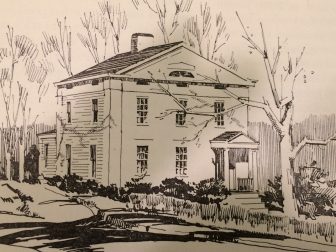 On Oct. 17, New Canaan’s Mimi Findlay, a founder and chairman of the New Canaan Preservation Alliance, filed a formal objection that reviews the history, architecture and significance of the house.

This is a letter of objection to the proposed demolition of the Scofield House at 4 Main St.

This single-family house is in the New Canaan Historic District, which was established in 1963. 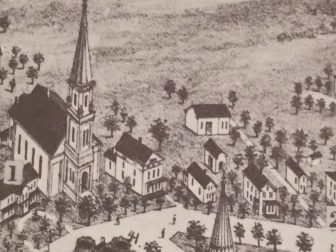 The c1840 Greek Revival style house was built next to the newly constructed Episcopal Church, consecrated in 1834, on upper Main Street, then called North Main St, The owner was Joseph Scofield, who had purchased one acre of land from Seymour Comstock in 1839.

Scofield grew up in Lewisboro and apprenticed with the shoemaker, Caleb Benedict, living in the Benedicts’ home on Brushy Ridge. He went to New York City as a clerk in 1830 but soon returned due to poor health and took a job as a clerk with Seymour Comstock’s general store. In May of that year he married Abigail Griffin of New Canaan, and was employed as a clerk in various town stores for the rest of his life. He and his wife – they never had any children – moved into their new home in 1840 and lived their entire lives there, until they both had died by 1908. In 1901 they were honored in New Canaan’s Centennial Parade as the town’s longest married couple, having just celebrated their 70th anniversary.  They were both Temperance advocates and he had been interviewed at the age of 99, by the reporters from the “New Canaan Messenger” about life in town when he was a young man.

Like many local business owners following the Panic of 1837, the general store he started on Locust Avenue went bankrupt in 1841. When he died the house went to Benjamin Mead, who had held a mortgage for several years. Mead then sold it to Helen S. Harmin Brown in 1909.

‘The Shamrock and Thistle Tea Room was opened on July 3, 1909, in the old Scofield House next to the Episcopal Church, by two New York women, property owners in New Canaan…. The exterior has not been changed but it is hard to believe that entrance hall, as well as the whole first floor, is done in Colonial yellow and white, the walls covered with beautiful oil and water color paintings by famous modern artists and the furniture is largely antique. The famous fireplace in the tearoom is one of the attractions. Old residents of New Canaan who knew the wonderful old man who for nearly one hundred years made this house his home, have come from many directions to see it and enjoy it with its new character. The ladies who carry on the enterprise, in addition to catering and serving meals of every description, make it a special feature of their enterprise to secure antique furniture, brasses, etc. for their patrons, and are prepared to make estimates for the decorating and furnishing of houses throughout, at the same price that customers would have to pay at the shops in New York … An added attraction for this month is the sale of work by home talent. This sale is in the nature of an experiment – the object being to discover, by the response made to the appeal for work, whether our town is yet ready to establish an exchange for these industries.” 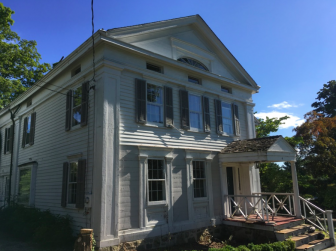 In 1914 Alice Morse bought the house from Helen Brown and then in 1920 sold to the three Fowler sisters, one who apparently continued the gift shop tradition, selling children’s dresses and other handmade specialties, another giving art lectures at the library, and the third was “gifted in literary lines” 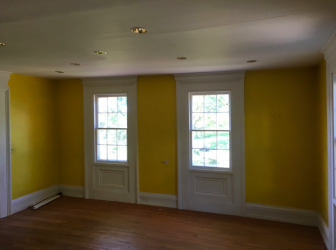 “Tommy” Tompkins (1913-1991) graduated from Yale, was director of the Bureau Military Service and Information at Yale and Department of Defense 1940-43; Master of Arts 1943, Assistant Chairman of the Board, Vick Chemical Co NYC 1843-1948; Curriculum Vitae Starr and Co NYC to 1979, then Director American Underwriters overseas, TAM, Sigorta, Turkey, and later President James M. Tompkins Company after 1987. Norma was the first woman ever decorated by the Patriarch of the Greek Orthodox Church in Jerusalem, and she traveled with her husband in the Far East and Asia extensively in1958 to 1961, when she returned home to “watch the completion of a new addition to our house” 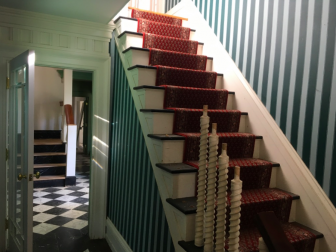 The last owners, James and Sharon Talbott, made major interior renovations to the house, and they started to construct a large addition in the rear for a dental office but separated before it was finished and it has been neglected for the last eight years, with both owners living elsewhere.

The Greek Revival house has a three-bay façade, two and a half stories tall. It is notable because of its elaborate attic fan light with spandrels under a wide pediment supported by pilasters, all above a frieze with rectangular widows which winds around the sides of the house. There are pilasters with recessed panels at the corners of the house supporting the frieze. The façade has heavy pediments above each six over six window on the second floor with a clapboard finish. The first story six over six windows have recessed paneled pilasters supporting a frieze, with a panel below, and the wall finish is flush boards, all above a stone foundation. The front doorframe appears to consist of similar recessed pilaster and the porch is supported by round columns with ornate capitals, of which one is now missing. The porch railing contains an “X” pattern, not original to the house. 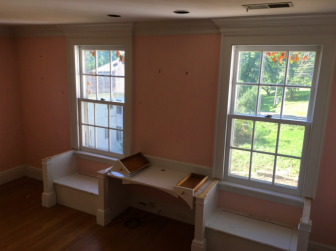 The south addition of 1962 consists of an eight-foot wide connecting but recessed link and a small replica of the main façade, with only two windows on the second story but a similar fan light and frieze windows, all above a recessed windowed façade and door on an open porch. The finish is clapboard and the end pilasters are recessed paneled. The window shutters are movable and may have been added when the front porch was created in the late 19th century, then later removed. Originally the façade would have been all flush boards, as depicted in the 1949 sketch by John Johansen, artist, for New Canaan Landmarks, p.351. 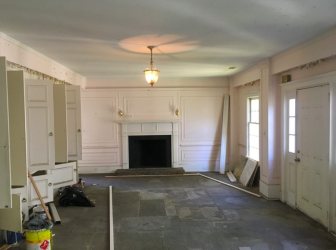 A room at the back of 4 Main St. in New Canaan that had served as first-floor living quarters in the past for residents there. Credit: Michael Dinan

This house at 4 Main St has historic and architectural significance. Joseph Scofield’s simple life as a clerk represents one of the emerging trades, as opposed to farming or shoe making, throughout the 19th century. His store’s bankruptcy apparently represented the general state of affairs in New Canaan for at least a decade after the 1837 Panic. At his death the introduction of a commercial use as a tea room and showroom indicates a growing interest in antiques, decorating, and a more leisured class moving into the old houses in town. The attempt to sell home-made items was part of the “Women’s Exchange” movement following the 1893 Chicago Columbian Exposition with its women’s pavilion. The next 20th century owner, the Tompkins, represent the international life of the mid century, with exposure to wars and terrorism, as they were in Beirut when the uprising occurred, and Norma was evacuated. 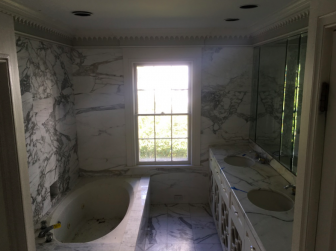 The architectural significance is derived from the elaboration around the attic fan-light, the corner pilasters and frieze windows, and the paneling around the windows, all set against the flat, marble-like surface of the facade. There remains to this day a basement cooking fireplace, with beehive oven, even though all the others may have been removed.

The house at 4 main Street is in New Canaan’s Historic District as a contributing building and deserves to be preserved; therefore I am objecting to its intended demolition.