Bruce Pauley never met his great uncle Charlie, who owned a tree care business in New Canaan in the 1930s and 1940s.

Still, that snippet of family history may be the best explanation for just why being outdoors and working with trees—evaluating, pruning, removing, relocating, planting—has sustained Pauley for his entire professional career, really his entire life.

By the time his father built the house up on Briscoe Road where the family would settle, Pauley recalled, “I happened to take an interest in trees.” 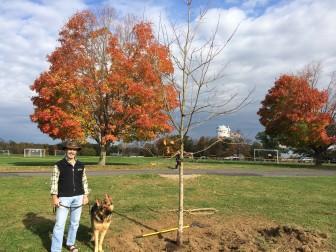 “I was intrigued by the idea of climbing trees from when I was a kid, I guess, everybody does,” he said, standing by a newly planted maple off of the main road through Waveny, one of 15 going in toward Lapham and also in the dog park. “And I just kept doing it when other people got smarter and decided to go make money instead. And I’ve just never thought of doing anything else as being compelling.”

This month marks four years in the role of tree warden for Pauley, a stewardship that has seen major changes in the way that New Canaan cares for its public trees, and by a man who arrived at his singular and abiding vocation as much by philosophy as practical consideration.

“I have a hard time imagining myself working inside,” Pauley said. “I like being outside. I feel best when I am in the woods. I just feel connected. It sounds kind of silly, maybe. But I think it’s the natural place for human beings, is in nature. I just feel good about it.”

If an affinity for trees took hold when Pauley was a kid climbing trees with the others, the arc of what has been a four-decade professional career began to rise after he graduated from New Canaan High School in 1964, started working at Kelly Nurseries that summer and then started climbing trees for Howard Toms’ tree care business.

Knowing he’d be drafted anyway, Pauley enlisted in the U.S. Air Force. He met and married his wife, a New Orleans native whom he’d met at Keesler Air Force Base in Mississippi (they have two kids, Jason and Lauren, who both came up through Center School and NCHS), served for four years as a U.S. Air Force sergeant based in Japan, then came back to New Canaan—with a beard.

“I came back to Toms at that point, and because I was growing a beard, he said he had to let me go, because people wouldn’t like that,” Pauley said with a smile (plainly visible within his beard). “This was the hippy era. So I started doing tree work on my own.”

A licensed arborist since 1975, Pauley took to the work and built up a good reputation based on quality work.

“When I got into doing trees, it didn’t take me long to realize that I wasn’t going to be rich,” he said. “But that was never the plan. I wanted to be able to do something that I enjoyed. Something where I felt like I was doing something that benefited people and just created nice environments, being able to maintain them in a healthy way and recognize danger when it existed.”

The knowledge he amassed over four decades has benefited New Canaan.

Asked by former First Selectman Jeb Walker to take on the role of tree warden following the ice storm of March 2010—at that time, it had been the responsibility of the parks superintendent, who’d been slated to get a deputy (a position that didn’t materialize) and whose duties, truly, became too much for a single person to manage in the storm’s aftermath—the way New Canaan manages its public trees has undergone a dramatic change in four years.

A position forged largely by Pauley himself, the New Canaan tree warden works with a budget that’s broken into a few different areas and every job goes out to bid. Pauley manages the budget and seeks the best deals possible for work that is done, receives emails from residents who identify public trees that they say should come down, renders decisions and explains why—based on a tree’s health and safety—and likes the interactions he has with people.

“I do enjoy it,” he said. “I am confident in what I do. I never feel like I’m doing something that I should not be doing, so that if somebody questions it, I have a good answer for it.”

Easily spotted around town in a Stetson hat, pickup truck and nearly always joined by a handsome German shepherd dog, Bheema, that he affectionately refers to as “Deputy Tree Warden” (“I post the trees, he marks ‘em”), Pauley is a morning regular at Zumbach’s Gourmet Coffee who admits that he is “not much of a joiner.”

Even so, one organization in which he’s been deeply involved is the Connecticut Tree Protective Association, established in 1922. The group’s education chairman since the 1990’s, Pauley designed a 13-week, biennial course on arboriculture for those seeking a license that consistently sells out. He ran that for 10 years, then became president of the organization and was appointed chairman of the Tree Protection Examining Board by the governor of Connecticut.

Asked how New Canaan is faring with respect to its public trees, Pauley said: “I think it’s coming along really nicely, I really do.”

Many trees that had appeared to be healthy but perhaps weren’t came down in the March 2010 storm, then Irene and Sandy.

“Hundreds of trees came down in those storms all told, so the roads became safer right away, when that happened, because you have less trees that are problematic left standing,” Pauley said.

“The ones now that we tend to remove are trees mostly that die and a large portion of those are white ash which are dying off from a disease for which there is no cure and no prevention. Beyond that you have a lot of roadside maples that become an issue with decay more than anything else, and those get removed. I would say that overall, New Canaan is in pretty good shape with its trees.”

It is a New Canaan on which Pauley has left an indelible mark, and perhaps that is as it should be, as the family has been responsible for land here since his own great-grandfather settled in town in the 1850s, up on North Wilton Road with a 600-acre property widely known at the time (and on maps from the era) as “Pauleyville.”

Standing in Waveny, Bheema on the other end of the leash, Pauley said the project now underway with 15 maples going in is happening because the many of the trees planted about 20 years ago along the road through New Canaan’s treasured park went in too deep and close to the road.

Motorists park too close to them, causing soil compaction and damage to root structure, “and then the lawnmowers because there was no mulch around them would bang into them, so we are planting trees, we’re going to take care of them correctly.”