Cathy Kangas was at a wedding in Palm Beach, Fla. early last month when, after seeing a photo on Facebook, the New Canaan resident had what she calls “a complete meltdown.” 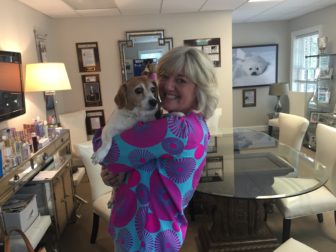 One of her friends had shared a photo of a beagle picked up as a stray at Stamford Animal Control that looked exactly like Ladybug, the little dog Kangas had rescued in 2016.

“My god, we love and trust our dog sitter and I thought, how could Ladybug have gotten out?” Kangas recalled. “I quickly called everyone, including [New Canaan Animal Control Officer] Allyson Halm, asking could she have got out and walked to Stamford?”

Her fears soon were calmed, as Ladybug, Kangas’s babysitter assured her, was safe and happy at home.

But the image of the roaming dog didn’t leave Kangas, who followed up on returning to New Canaan with Stamford Animal Control. While visiting what turned out to be a male beagle, Benny, in the city’s shelter, Kangas was struck by what she saw.

“A city pound has no money and for these poor dogs it was like a jail, probably worse than jail,” Kangas said. “They had no beds, so we are supplying beds and toys, but what broke my heart was when Officer [Tilford] Cobb told me, ‘We have two beautiful girls in here, pit bull mixes that have been in here for four years.’ When I heard that, I said, ‘You know what? I don’t know how we will work it, but let’s try a Free the Shelter and highlight the dogs sitting here right away.’ They’re not getting promoted, there’s no marketing, and we have to get them out in the public eye.”

She referred to a program whereby Kangas through PRAI Beauty—a certified cruelty-free beauty company that she founded and where she serves as CEO—agrees to pay the adoption fee for any animal adopted out of a shelter or rescue group for a set period of time.

Starting last week and through Jan. 14, PRAI is paying all adoption fees at the Stamford Animal Control Shelter.

More than 2,300 dogs, cats and other animals have been adopted out through the program since PRAI launched Free the Shelters last summer, said Kangas, who sits on the Board of Directors of the Humane Society of the United States.

In Stamford, those who adopt an older dog that’s been in the shelter for more than one year will receive two free training sessions to help the animal acclimate to its new home.

Cobb said right now is “the perfect time of year to adopt a pet from our shelter.”

“Free the Shelters helps with overcrowding and enables people who were thinking of adopting a pet start the New Year off with a new addition to their family,” he said. “We are thankful to Cathy Kangas and PRAI Beauty for this important contribution to Stamford Animal Control.”

Meanwhile, to Kangas’s great surprise, no one came to the shelter to claim Benny the beagle, who almost certinaly was dumped. So she adopted him and he’s now part of the Kangas pack, with Plum the golden retriever and two Rottweiler-pit bull-beagle mixed-breeds named Hannah and Hamish, rescued together from an abusive situation.

“He’s a mischievous little devil,” Kangas said of Benny. “He’s sweet as a bug. He got to me and I felt sorry for him and brought him home to a bed—he literally, you could tell did not want to be outside, he ran through the door, into the kitchen, took a quick sip of water and he went to that bed and slept for 20 hours. I almost was worried, I thought something might be wrong with him. But he was just exhausted.”

9 thoughts on “‘Free the Shelters’: New Canaan Woman Steps Up To Pay All Adoption Fees at Stamford Animal Control Shelter through Jan. 14”