The New Canaan Building Department on Monday issued a demolition permit for the new owner of a 1949 ranch on Brooks Road to raze the house. 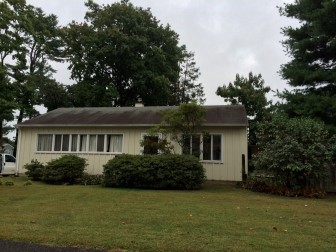 The .28-acre lot was purchased for $850,000 in September by a limited partnership out of Greenwich.

It isn’t clear what will replace the home that had stood there—the town has not yet received a building permit application for the parcel. 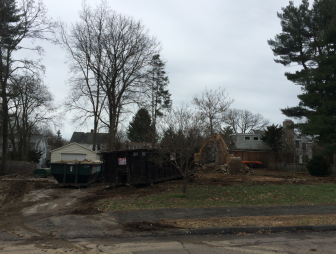 Town officials issued a demolition permit for the ranch at 52 Gower on Monday—it was down as of Thursday, and it isn’t clear what will replace it. Credit: Michael Dinan

The contractor on the $30,000 demo is AC&S Excavating Contractors out of Pound Ridge, N.Y.

The developer of the mixed-use retail-and-residential complex ‘Heritage Square’ that’s going up on Forest Street on Tuesday put in for a $125,000 interior fit-out for the future home of Embody Fitness Gourmet.

The healthy foods provider will occupy one of two retail spaces on street-level in the high-demand complex—Pet Valu will occupy the other. 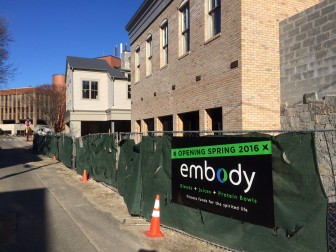 Both are eyeing springtime openings, when the work by Christopher Gatto and Forest Street Properties LLC will be completed.

The Embody work will include a customer seating area, prep area for juices and food, and ADA-compliant toilet in a 1,026-square-foot space, according to the application.

Finally, the New Canaan YMCA on Friday was issued a permit for $1,490,000 in interior renovations as part of its ongoing project on South Avenue. These renovations include locker rooms, a new café, office space and roofing, the permit said.