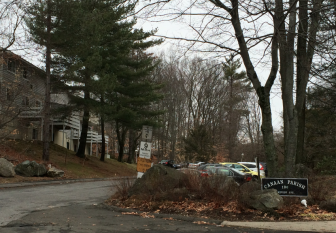 Canaan Parish is a public housing complex at the top of Lakeview Avenue, by Route 123. Credit: Michael Dinan

Under the agreement between the two parties—as per the defendant’s agent, Phoenix Corporation—Furanos was to be paid $2,000 per snow plow, $650 per salting and $2,250 per month for landscaping at Canaan Parish, an affordable housing complex on Lakeview Avenue.

“To date, the Defendant has not paid for the snow plowing and landscaping services rendered,” the lawsuit said.

New Canaan Neighborhoods is listed as a non-appearing defendant. Officials from the organization could not immediately be reached for comment.

The plaintiff’s attorney, Christopher Brennan of Fairfield-based Costello, Brennan and DeVidas, P.C., could not immediately be reached for comment.

A resident of the apartment complex had filed a lawsuit in 2014 after falling down twice on some ice there—an action that was withdrawn last month, according to the Connecticut Judicial Branch.