New Canaan Public Schools, Grace Farms and New Canaan Library are both closed Friday after a quick-hitting, predawn snow storm that could leave up to four inches in town, officials say. 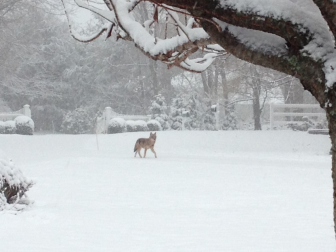 A coyote moves through a yard off of Ponus Ridge on the morning of Feb. 5, 2016. Published with permission from its owner

New Canaan is under a winter weather advisory, according to the National Weather Service, and it should stop snowing around midday.

The district’s cancellation of school marks the first snow day of this academic year. The last day of school originally had been scheduled for Tuesday, June 14. 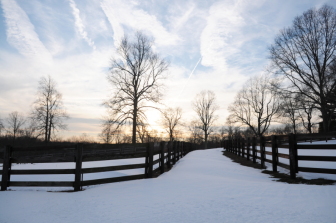 The first week in February has been a tough one in New Canaan in recent years, shuttering businesses and closing school with freezing rain and a winter storm one year ago and in 2014.

Grace Farms is calling for visitors to enjoy the snowscape on Saturday (see photo at right).

Though Eversource is reporting widespread outages in eastern Connecticut, just one customer of the utility had no power as of 12 p.m., according to the company’s map.