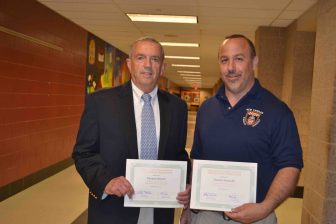 The public schools “are filled with dozens of wonderful stories taking place throughout the district on a daily basis,” NCHS Principal Bill Egan said.

“The lifesaving rescue by Tom Brown and Patrick Mainolfi certainly rises to the top of this list. New Canaan High School, in particular, recognizes and appreciates their valiant efforts.”

At about 3:30 p.m. on April 20 (a Thursday), Mainolfi—a campus monitor at the high school who had worked for 21 years in the state Department of Corrections—spotted a teen running down a set of stairs near the locker room in the athletics area of NCHS.

“I didn’t know what was going on and I could hear him saying, ‘I’m choking,’ ” Mainolfi recalled. “I turned around started giving him the Heimlich.”

Meanwhile, Brown—a supervisory aide assigned to the school’s physical education department who spent his career in the Connecticut State Police, including 25 years as an EMT—immediately saw what was happening from the other side of the glass wall of the Peter M. Deane Fitness Center.

“I saw somebody pounding on the glass and Pat was starting to do the Heimlich on the kid, and I could see that the kid was distressed, so I ran out from the fitness center,” Brown told NewCanaanite.com.

Even after 30-plus seconds, whatever was lodged in the student’s throat wasn’t coming out, so Brown determined that the traditional Heimlich wasn’t working.

“The protocol is to reposition [the victim], so what I did was I grabbed the kid by the neck and leaned him over and while Pat was squeezing him, I gave him maybe two or three back blows and on the second or third one” a bottle cap emerged from the teen, Brown recalled.

It turned out that teen likely had swallowed a plastic cap in opening a bottle with his teeth, officials said.

Recognized at a recent Board of Education meeting, the two NCHS workers have met the boy’s family.

“When you look back on it, you just react and you just do what you’re trained to do,” Brown said.

All high school coaches are certified in first aid, CPR and automated external defibrillators, he added.

Mainolfi said he was “just glad I was there for” the student.

“It can happen at any time, to anybody,” he said. “I have a young son, so I am always on guard. My son is six. I’m glad everything worked out. It could have been a lot worse.”