A planned Marshall Ridge Road home renovation that includes turning a blacktop driveway and garage into a grassy yard is winning support from neighbors and town officials. 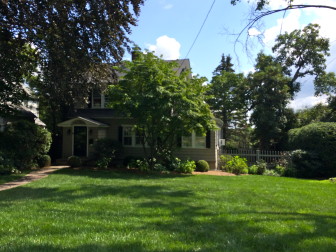 The lot at number 34 sits on the southwest corner of the loop created by Sunrise Avenue, and includes a 1929 two-story Colonial. Owner Mitch Hoffman, a Board of Education employee (and NCHS varsity baseball coach) represented at a Zoning Board of Appeals public hearing Monday by Stamford-based attorney Burt Hoffman (his father), needs three variances to build an addition off of the rear of his house—that is, down along Sunrise Avenue—that will include a playroom and master bedroom built above a new lower-level garage.

“The most severe impact of what he wants to do is a renovation and addition—essentially a bedroom for his growing family, and the most impact is on the Sunrise side,” Burt Hoffman said during the hearing, held in the Douglas Room at Lapham Community Center. 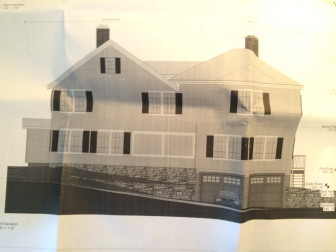 Here’s a rendering from the Sunrise Avenue side that includes the addition in back (on the right in this drawing).

The addition would increase the size of the home, which would still be well under allowable coverage—Mitch Hoffman is allowed 2,128 square feet on the .2-acre property, and he’s asking for about 1,780.

As part of the project, the current driveway and garage along the easternmost edge of the property—several dozen feet off of the house itself—would come down to make way for a yard.

“That will be yard for his son, my grandson, and others to come,” Burt Hoffman said with a smile. 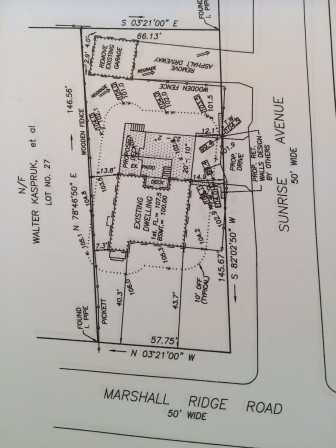 Next-door neighbor Brendan Reidy at 82 Sunrise said the existing driveway with the garage “backs into my front yard.”

“So I’m actually going to be very happy if that became a yard,” Reidy said. “I’ll actually be probably the most impacted by all of the construction, and I’m totally in favor of [this project].”

Another neighbor, Dave Torromeo of 36 Sunrise (formerly the house where the Lewis family lived, as many New Canaanites will remember the late Peter Lewis who for many years bagged groceries at Walter Stewart’s), also spoke in favor of the project, saying he was “thrilled” and adding the New Canaan planning officials had approved a half-dozen other renovations on the street.

Gene Kaspruk, whose elderly parents live next door at 32 Marshall Ridge Road, voiced concerns about what time of day construction would go on at the house, and how long it would go on. Kaspruk, while saying he overall did not oppose the addition, also noted that his parents yard already has a problem getting sunlight—“it’s mildew-y and plants don’t grow”—and said he was worried that the addition along his parents’ southern property line would further impact the yard.

At the same time, Kaspruk said he had raised those concerns with Mitch Hoffman and felt satisfied they’d find a way to minimize impact—for example, the outside work would take only three months, Mitch Hoffmann would speak to the contractor about not starting work too early, and to compensate for the additional height from the addition, an overly tall hedge could come down.

ZBA members voted 5-0 in favor of granting the variances. Board Secretary Jeanne Rozel said positives of the project included creating a green space where the garage had stood and increasing the value of homes in the neighborhood.

The variances specifically deal with setbacks for the lot and single-family dwelling (legal non-conforming), which predates New Canaan’s zoning regulations by a few years.

Here’s a map that shows where the property is located: