Months after New Canaan’s Jeanette Wallace in early 2014 created Hungry Kidzz—a nonprofit organization whose mission is to get as much food and joy to needy local children—she launched a “stocking stuffer” program whereby donors could fill a stocking with goodies that she’d redistribute through area human services groups. 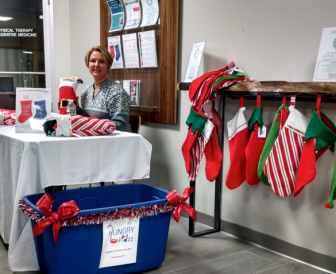 Jeanette Wallace of Hungry Kidzz at Halo Studios. The New Canaan-based nonprofit organization is accepting stockings for its holiday program as well as checks to the support the effort, through Dec. 15. Contributed

Relatively new to town—Wallace moved here with her family, including three kids, about four years ago—she didn’t have a physical location at the time to give her program visibility and to collect donations.

This year, Wallace teamed up with Halo Studios on Grove Street and expanded the program so that those who wanted to support it without physically filling a stocking themselves could help by funding the purchase of treats, candy, gum, puzzles, arts & crafts, books, barrettes, nail polish and other items.

“We felt last year that there are a lot of people that wanted to do stockings and but they didn’t have time and would rather write a check,” Wallace said.

Formerly a Trumbull resident, Wallace said she realizes the organization’s mission through programs such as the stocking stuffers by helping connect New Canaanites with needy families from surrounding towns in a meaningful, direct way.

The stockings themselves—Wallace predicts more than last year’s 1,300 for this year—will go to families not only through the New Canaan Food Pantry but also Open Door Shelter in Norwalk which is both a soup kitchen and shelter, Center for Family Justice in Bridgeport, St. Thomas Apostle Pantry in Norwalk, Inspirica in Stamford, FreshStart program in Bridgeport, Hope Community in New Rochelle, N.Y. and the Trumbull Food Pantry.

Those seeking to pick up a stocking and fill it for the program may do so at Halo Studios, and what’s packed inside is for a specific age or gender kid, there’s a place to note that on the stocking itself, Wallace said.

“This year was the first time that I got involved with Halo and it has been amazing,” Wallace said.

Cobie Graber, who oversees marketing for Halo, said that Wallace’s organization “aligns perfectly with our mission of elevating the health and wellness of our local community.”

“One hundred percent of the donated funds go directly to feed hungry kids in our area and the stocking drive makes it easy for our clients and employees to do our part to end local childhood hunger,” Graber said. “Recently, Pryority Wellness hosted a trunk show featuring Graced by Grit in which 20 percent of sales were donated to Hungry Kidzz. Our organic cafe chef Miles Reaves also donated 10 percent of his sales on Dec. 2, when Jeanette Wallace was at Halo Studios selling stockings.”

Wallace said local companies such as Unimen and civic groups such as the Girl Scouts also have gotten involved in supporting the program this year.