Members of the Zoning Board of Appeals at their most recent meeting said they were concerned about a Knapp Lane backyard shed that had been rebuilt bigger and without town approvals and is located near a neighbor’s property line. 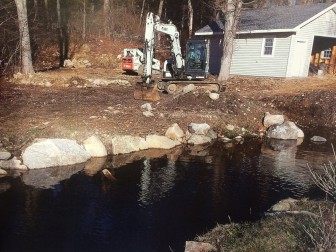 Evidence of violations of wetlands, building and P&Z regulations at 109 Knapp Lane in New Canaan. Department of Land Use photo

ZBA member Angelo Ziotas said at the group’s most recent meeting that he also was uneasy with an estimated 80-foot retaining wall created at 109 Knapp Lane that runs some way into the property to the east.

Though the retaining wall itself was not part of the property owner’s application for a variance that would grant after-the-fact approval for the shed, “it does color the way in which I am looking at this whole situation,” Ziotas said.

“I am really troubled by the trespass and the retaining wall going onto this neighbor’s property,” he said at the ZBA meeting, held at Town Hall. 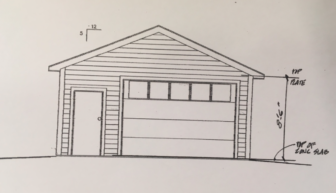 A rendering of the new storage shed, already installed, at 109 Knapp Lane.

The comments came after town officials issued a homeowner Hasim Sabovic a fine and cease-and-desist order following multiple violations of state laws, building codes and environmental regulations for work done in and near a pond and brooks on his 1.84-property, as well as the built storage shed that sits about eight feet from a neighboring property to the east, in lieu of the 25 feet required under New Canaan’s Zoning Regulations for accessory structures (see page 58 here).

According to architect Emilio Escaladas, the property faces a hardship in that there’s a lack of storage space, and the shed rightly should have been rebuilt where a somewhat smaller, dilapidated structure had stood because it’s the highest point in an area of the parcel that sits in a flood zone.

“It’s like, ‘Where do we put it?’ That’s the highest spot on the ground, that’s where we do it,” Escaladas told the ZBA. “You would not do it any other place but where it was because of the height and because of this whole flood issue, so the big hardship is storage and the second hardship is to leave where it is because anywhere else is a mistake.”

Though Escaladas said the only neighbor for whom the shed is visible is a Spring Water Lane homeowner on the other side of a pond, the owners of a vacant property to the east said that characterization is misleading.

Tito Cerretani, identifying himself as an immediate neighbor, noted that the shed is “eight feet from our property.”

“It is very apparent,” Cerretani said. “It is not even close to the structure that was there before. That was a wood-framed, falling-down, dilapidated shed. This is a structure with a concrete floor. It is a structure.”

Ultimately, members of the ZBA continued the matter to its next meeting, saying they needed hard evidence that the new shed is not, in fact, closer to the Cerretani property, and just how much larger it is.

Board members asked Escaladas whether the height of the new shed is the same as the former structure (no it’s about 30 percent higher), whether there are any drawings of what used to be there (no), whether the new bridge also replaced a former one (yes) and whether the shed’s only purpose is for storage (yes because the property floods).

Speaking on behalf of her mother, Ann Cerretani noted that the zoning regulations are publicly available and that it’s clearly stated within them that a permit is needed prior to rebuilding a structure such as the shed.

“If this variance is approved, the zoning board would be rewarding Mr. Sabovic for irresponsible behavior in ignoring the zoning rules, as well as the necessity of applying for a building permit,” she said.

Tito Cerretani also noted that “work was done with unpermitted retaining walls that were on our property, without our knowledge.”

“A portion of it extends into our property and we had no knowledge that the work was being done,” he said.

Though he conceded that the retaining wall’s trespass onto a neighboring property was problematic, Escaladas said that creating it “was in essence to benefit the entire parcel and the hydraulics of the area are benefitted at tremendous expense to this man [Sabovic].”

Escaladas added that ZBA members clearly were “in a very difficult position.”

“I want to add one simple observation,” he said. “If I was a true neighbor and I lived there and if it truly impacted me, I would say it would weigh tremendously on your way of thinking. There is no house there, there is no one. I know they are affected by it in an intellectual way—maybe they are trying to make some other statement about issues that they have had in the past with the town. But it seems to me that you treating impact to neighbors is really an important aspect of your thought process. And I just want to remind you that there is no house there, there is no impact.”

“That’s not a good argument,” Ziotas said, noting that a neighboring property owner had voiced opposition to the variance.

ZBA member John Mahoney, who has been critical of after-the-fact applications in the past, said that the board should work on a communications plan under which the public would be educated to mitigate the need for such applications.

“Maybe we would come to the same conclusion—perhaps, or maybe we would not—but our decision is now either to grant something we otherwise would have done or otherwise ask a neighbor to tear it down, and I do not think that’s a fair position for anybody to be in,” Mahoney said. “So regardless of where we end up on this, I think we ought to convene a group to come up with a communications plan for the community so that they can be addressed before they are a problem.”

The ZBA’s next meeting is scheduled for Aug. 1.