What follows are excerpts from parking ticket appeals letters filed recently with the New Canaan Parking Bureau. Where available, we’ve included information on the violation for which these people were cited, in what amount, and where and when the violation occurred. We preserve all capital letters and punctuation as written by the appellant. 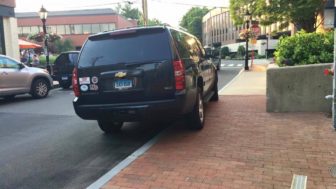 “I respectfully wish to appeal this ticket as I believe it was issued in error. I had parked along Main Street in a 90-minute spot just prior to 11 a.m. on 7/13. I know the time because my teenage son had an appointment at [a spa] at 11 a.m. and we were right on time. We returned to the car within the 90-minute window to leave. Sadly, the attendant informed me that the ticket ‘had already printed.’ I arrived at 10:55 a.m. and the ticket was printed at 12:21 while I was standing there. This seems a little aggressive for a 90-minute zone. Also, there was no attendant near where I parked the car, which means they had to come by after 11 a.m. Please consider voiding this ticket.” 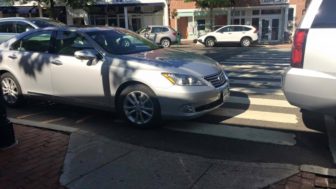 “I originally came to visit New Canaan and have a cup of coffee at Starbucks. I arrived early, approx 6 AM and it was still somewhat dark and a humid dismal morning. I did not see many cars parked near the Starbucks and I chose a spot under a tree, debating whether or not to take a train ride into Stamford. I did not see the time limit parking sign (even though, after I got back from Stamford, I did see the sign nearby—after I saw the tickets on my car). Thanks for hearing my appeal.” 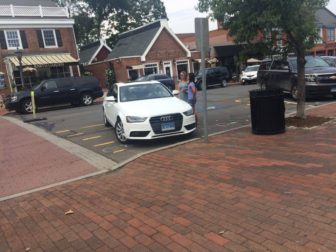 Not a parking space, on Elm Street. MW photo

“Other guy parked funny … No other spaces!”

“On June 28, 2016, I parked in the Main Street lot in New Canaan. Parked next to me was a large SUV which was encroaching on my space, space #5. Having been in this parking lot before, and having seen it completely full, I decided to park next to this car even though there were other spaces available. I felt that since I was going to an early lunch and I had a small car I should park close to this big car to enable an empty, larger space, should the lot fill up. I did not notice I was over the line in doing this. I certainly could have parked in a number of closer spots. Again, I thought I was being considerate. Instead, I come out with a ticket. The person I was having lunch with, went to her car and could not enter her car due to the fact that another very large SUV was in the space next to her and she could not open the door. While the car was within the lines no ticket for that car, but we had to wait some time until the person returned and pulled out so she could get into the vehicle. I share this second story to indicate as a New Canaan consumer I believe I should have gotten a warning. I will be appealing this ticket.” 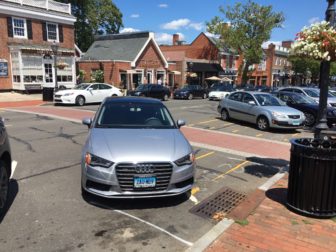 “Hi! I had breakfast at Le Pain Quotidien that morning and ran back inside to use the bathroom. When I came out [a parking enforcement officer] was walking toward my car saying she wished she hadn’t pressed print or had walked toward my car with her ticketing device in hand because three seconds earlier I would not have had a ticket and she couldn’t void it once she had hit print. She said to go to the parking commission office on Tuesday and she would verify that it had literally been three seconds. I also should have known but was unaware that the 90-minute parking applied to Saturdays. I thought it was only Monday-Friday. I’m sorry about that and I am happy this ticket can be waived. Thank you so much!”

“My husband was parked on Main Street outside CT Muffin. I have a broken ankle and am unable to drive. He put his hazards on and stayed in car while I ran to pay for an item. He was double parked, which in normal circumstances is illegal however, HE NEVER LEFT THE CAR. I was gone for no more than 3 minutes and a parking officer pulled up behind him and issued a ticket. She stated that the ticket could not be reversed since it was already written, and stated that we could reverse the ticket and speak to the town. I think in the future, the parking officers need to check the car to see if someone is in the driver’s seat. Maybe the driver is waiting for a handicapped person or an elderly resident. In my circumstance, walking is quite difficult and uncomfortable and my husband was waiting for me outside a store I needed to go to so I did not have to walk far. I understand the town makes money from tickets, and when I am in the wrong I will gladly pay. However, in this circumstance I feel the ticket is unwarranted and unfair. Please reverse the fine and ticket on our vehicle.”

“I was issued this ticket while stopped (in the drivers seat with the car running) at the intersection of Main Street and East Ave. I have no idea why I got this ticket as my car was NOT parked. I was on my way to take my daughter to camp at the Performing Arts Conservatory on Pine Street. This was her second day of camp and I made a wrong turn off of 124 and was trying to figure out the best way to get to Pine Street. As I was about to turn right on East Ave., I saw a woman approaching the car. I opened the window at which point she handed me the ticket and said, ‘Oh, I didn’t see you in the car through your tinted windows.’ ”

“I pulled over for a safety reason (I just bought my car on Friday and the dashboard kept beeping). I pulled over into a handicapped access area. I was by no means in the handicapped space. I also had my hazards on. The officer gave me the ticket and walked away.”

“I am appealing this ticket since it is wrongful. I originally parked my car directly in front of 140 Elm Street, New Canaan at exactly 9 a.m. I brought my son to a doctor appointment, I left him there, and then went shopping with my daughter in town. At 10:25 a.m., I returned to my car and drove around the block, since I was still shopping. I then re-parked closer to Starbucks on the same side of the street. I returned to my car at 11:55 a.m., only to find a ticket given to me at 11:37 a.m. Upset about this injustice, I found the parking attendant badge #304 and told her that the car was moved and not sitting in the same spot for 90 minutes. She stated that cars can’t be moved to another spot. I asked her ‘WHERE IS THE SIGN THAT SAYS THAT!!!” I was told there is no sign, it’s just a known unwritten fact. This is totally unjust!!!! So this means that shoppers can only shop for 90 minutes and then they must leave the town!!”

Battery died. Lights left on. Went to fire station to ask for help. Come back ticket on window. Had to call AAA. They arrived shortly after 2 p.m.

15 thoughts on “‘I Have a Broken Ankle’: Parking Ticket Appeals”