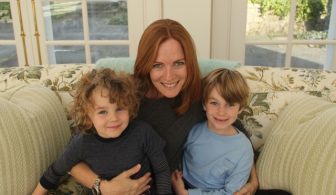 Caryn Antonini of New Canaan with her sons Nicholas and Cristiano. Contributed

Fluent in French, Spanish, Italian and German (as well as English), Antonini continued her education at Georgetown University, where she studied children’s acquisition of language at the School of Language and Linguistics.

Then, while in Europe on vacation and speaking to a friend of her husband’s, she was asked  why she wasn’t developing her own language program.

The question stuck with her for the rest of the trip.

“I woke up the next morning and that was the real moment,” recalled Antonini, founder and CEO of Early Lingo. “It’s my passion and it’s more meaningful than any other business I had been a part of.”

Since then, Antonini’s idea has grown into a global business. Founded in 2011, Early Lingo has developed a fun and interactive language learning system that’s used internationally.

“We have customers in schools in Fiji and across the U.S.” Antonini said. “We’re in the school system in [Los Angeles] … and New Canaan Country School with our app.”

Educated herself at New Canaan Country School, Antonini grew up “a tomboy” in town, she recalled with a smile, and moved back two years ago.

“I played hockey, soccer, tennis, baseball through my club and the town,” she said. Active in outreach, she also volunteered at AmeriCares Foundation when the New Canaan-founded organization was based here.

Asked what drew her back to her hometown, Antonini—who had worked as an entrepreneur of “a gift business and a translation business” —said New Canaan has much to offer young families and her 6- and 8-year-old boys, Nicholas and Cristiano.

“I just knew about the schools and the community that was present from growing up here,” she said, adding: “I thought, ‘I just need to go back.’ ”

She did, and she brought Early Lingo with her, with its mission “to see that all children are bilingual” and given “the power of language.”

Antonini said she started Early Lingo with “retail, tangible products” and has recently “delved into apps” and brought more modern technology into the model.

The integration of digital products expanded her globally minded business even further. Like the mission of Early Lingo, Antonini’s team of app and Web developers are based in multiple countries.

“They kind of span the globe,” Antonini said. “I have one in Chile, one in San Jose, my Web developer is in Pennsylvania, I have a team in L.A. It’s the nature of the business, which is great.”

While Early Lingo is truly a large-scale effort, Antonini finds her home and comfort in small town, local living.

Her kids enjoy the same “kind and welcoming” environment that Antonini enjoyed, she said, and they are active in the New Canaan Football Club, tennis and taekwondo. A proud mother, Antonini quickly added that “her oldest just made the [soccer] travel team, and we’re all very excited about that.”

Asked about how the town has changed since her youth, Antonini said, “not too much.”

“The community is maybe even better, it’s just so great,” she said. For Antonini, the town “has been a constant, I feel so blessed to be a part of it.”

And she has seamlessly re-integrated here, participating in outreach initiatives that allow her to combine her passion for multiculturalism with local partners.

“There’s so many opportunities in this community and it’s been a great transition back.” Antonini said. “I’m going to be working with [New Canaan Library] in the area of language and culture. I’m also developing something with Family Centers to create language programs for their clients. I’m in the Global Citizens Resource Group with New Canaan Country School too.”

Early Lingo is sponsoring a “Summer Language Challenge” during July on its social media, posting a new non-English word each day. A Summer Language Launch Party will be held 10 to 11:30 a.m. Sunday at the New Canaan Nature Center.

Asked about the future of Early Lingo, Antonini said she would “love to see it in more schools” and continue to grow her digital presence for “accessible learning anytime and anywhere.”

“Language and culture ties into global citizens not being just aware, but helping kids to navigate our different communities,” Antonini said, asserting that it’s more important than ever before for our kids to understand multiculturalism now that every community is global.

“You can walk down the street and run into someone speaking a different language, even in New Canaan, Connecticut,” she said.