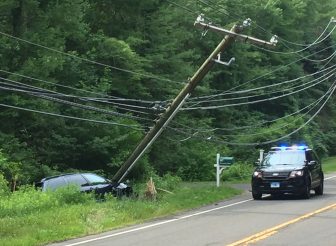 A motor vehicle crashed into a utility pole in the area of 187 Silvermine Road on July 1, 2018. Photo published with permission from its owner

Emergency responders at about 10:56 a.m. responded to a single-car crash into a utility pole near 187 Silvermine Road, on the east side of the road.

Eversource crews were on scene, and New Canaan Fire Department and EMTs also responded. No one was transported to a hospital.

The vehicle had been traveling southbound, fire officials say.

The crash appears to snap the pole near its base, and it leaned dangerously over the road, straining several wires. Just two New Canaan homes were without power as of 12 p.m., according to Eversource.