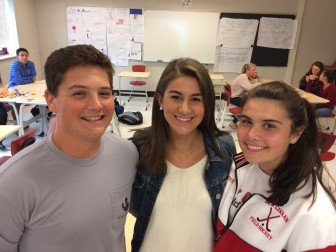 The nonprofit provides meals on the weekends and through the summer to needy kids at several area schools and community centers.

Yet as the base of kids served by Filling In The Blanks has expanded—from DOMUS to Bedford Hills Elementary School to KT Murphy, Roxbury, Boys and Girls Club and Chester Addison Community Center—the need for volunteers to support the organization also has grown (more on that below).

Together with classmate Maggie DeFrancesco, Brown as a sophomore launched the Filling In The Blanks Club at NCHS—an extracurricular group whose members say they receive immediate and special rewards as they do good for peers in neighboring communities.

“We just wanted to raise some money and awareness for the organization and help provide for kids who really couldn’t afford to have three meals a day on weekends,” DeFrancesco said on Thursday afternoon outside NCHS Room 223, where more than a dozen underclassmen who had signed up during Club Fair waited to more hear about Filling In The Blanks.

Asked why she decided to put her time and effort behind Filling In The Blanks rather than other deserving clubs that serve charitable organizations, DeFrancesco said: “I thought this was more for us because it helps kids, so it’s more people around our age and in this area. It’s people like me and Grace. It’s not really necessarily helping somebody so different from us.” 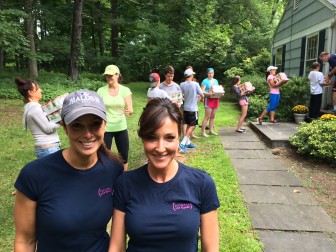 They help by raising money and awareness for Filling In The Blanks through bake sales and posting flyers, and also helping on out delivery and “packing” days at the organization’s base on North Wilton Road—a 4,000-square-foot house devoted entirely to storing the food that Knight and co-founder Tina Kramer purchase for the needy kids, and then packing it.

Right now, Knight and Kramer are seeking volunteers to help on packing days and also drivers who will deliver packed bags of food to the area organizations serving the kids who need them (see list at end of this article).

One of the early members of the high school club is Knight’s son, Andrew, a NCHS junior (and baseball player, fall ball coach and little league umpire) who said his interest in Filling In The Blanks has grown since he’s learned more about the kids the organization serves.

That excitement—starting with Brown (a Rams field hockey player and golfer) and DeFrancesco (who volunteers at Staying Put in New Canaan, Waveny Care Center and through the National Charity League) is typical of those involved, said Arri Weeks, a NCHS English teacher who serves as faculty advisor to the Filling In The Blanks Club.

The girls have taken initiative and “shown leadership skills within the group by organizing and problem-solving when things weren’t working, figuring out how can we recruit more numbers.”

“So it has been a learning experience,” Weeks said. “It’s also something meaningful and we believe in what we are doing.”

During the high school’s Club Fair on Thursday, nearly 50 students—mostly freshmen and sophomores—signed up for the club, Brown and DeFrancesco said.

One newcomer to the club is Emma Reilly, a freshman who also signed up for China Care, Pura Vida and UNICEF clubs. Reilly said her plan is to attend meetings on each group and narrow down her commitment to two clubs.

Asked what she found attractive about Filling In The Blanks, she said: “I thought it was a really good opportunity to help people and raise money for a nonprofit.”

Asked about ways that the NCHS club has spread awareness of Filling In The Blanks among teens and youth, Shawnee Knight noted that they’ve raised money, volunteered at the New Canaan Food Revolution and organized food drives (there’s one scheduled for this coming Sunday at Walter Stewart’s Market).

“It is great to see the commitment that the kids involved in the club have,” Knight said.

“Part of our goal with Filing in the Blanks, aside from fighting childhood hunger, is to raise awareness with the next generation, hopefully inspiring them to help others. I think that the NCHS club is a perfect example of that.  These kids see that there are children their age that have a need and they are doing something about it.”

Knight also noted how Walter Stewart’s has gone above and beyond in its support for the program.

Filling In The Blanks since launching in 2014 rejiggered its offerings with a “Healthy Foods Initiative” where fresh fruit is included in deliveries.

“This is difficult to do given our $5 per child per week budget,” Knight said. “Walter Stewart’s has given us a cost-effective solution and provides us with weekly boxes of fruit that fits within our budget. They have also worked with the NCHS students coordinating food collection and donations.”

Filling in the Blanks needs help packing bags for children in need. The organization is holding a special group packing day on the following days:

The organization also needs several volunteers every Thursday to pick up bags of food and a box of fresh fruit from the Filling in the Blanks house 791 North Wilton Road, and deliver them before 1 p.m. to the following schools: