The foundation for the planned Pine Street Concessions marketplace will be poured next week and the steel skeleton of the structure will start to take shape in the next few weeks, according to its owner. 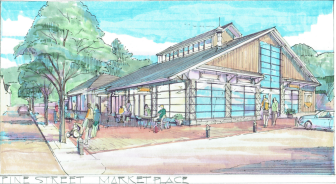 The artisanal marketplace at 75 Pine St. is slated to open in early 2016.

An original fall opening for the Grand Central-style marketplace has been pushed back to early 2016 due to a more involved environmental cleanup of the site at 75 Pine St. than what had been expected, according to Peter Lane of NCLC.

Four primary vendors will occupy space inside the 3,000-square-foot metal, framed open structure is to resemble an old railroad building, Lane said: Two food vendors, a sweets and ice cream vendor, and a vendor of beer, wine and spirits.

“We are looking for gourmet food you can eat on premise,” he told NewCanaanite.com. “We will have an outside patio and beer garden.”

The 1.5-story building is to have glass frontage, a metal roof and brick at the base. A centerpiece of the site plan approved in April by the Planning & Zoning Commission is its plaza out front, made possible in part by a plan to carve out a large parking area to the east of the marketplace (the area formerly occupied by New Canaan Cleaners).

Announced in February and with a physical rendering released in March, Pine Street Concessions will feature brick paving throughout the plaza, and original plans called for an existing curb cut for cars beside Tony’s Deli next door.