New Canaan would need to spend some $2.1 million—with an estimated $450,000 beyond that, for abatement—in order to bring the Playhouse Theatre on Elm Street to safe, structurally sound and ADA-compliant condition, public works officials said Tuesday. 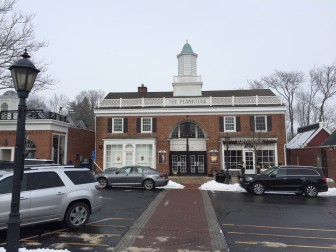 The 1923 building needs parts of its roof and brick exterior replaced ($550,00), an elevator and ADA-compliant wheelchair access ($1,120,000), new gutters and drainage system ($200,000) and, perhaps most of all, a new layout for its sprinkler system—currently perched above a layer of insulation in the ceiling, according to Michael Pastore, director of the New Canaan Department of Public Works.

“If the sprinklers come on, it’s going to soak that insulation, get heavy and probably bring down the ceiling,” Pastore said while presenting DPW’s budget request (see page 39 here) to the Board of Finance at a meeting held in the Sturgess Room of the New Canaan Nature Center. “That’s the situation we have.”

The figures above do not include contaminant abatement for any capital work needed—Pastore said a consultant hired to assess the structure last year put the figure at $450,000, strictly based on the Town Hall renovation.

Purchased by the town in 2007 for $2,205,000, the theatre fetches $110,00 per year in rent from tenants that include Bow Tie Cinemas (about halfway through a 15-year lease), New Canaan Cares, New Canaan Chamber of Commerce and Earth Garden on the street level, officials said.

The rent for Bow Tie was pegged at a low amount, First Selectman Rob Mallozzi said, in order to entice the movie company to operate it.

“It’s pretty sobering,” said Mallozzi, who also serves as chairman of the finance board.

“This building is going to cost us money in the future … It’s something we have to talk about because it’s the last thing we want to do to drain our coffers for something if it’s not kicking us much back,” Mallozzi said.
Rehabbing the theatre could be a “slightly more” attractive project to a private group, he said, since ADA requirements would change somewhat.

Finance board member and former First Selectman Judy Neville recalled that at the time the town bought the Playhouse, “there was a strong feeling we had with the movie theater that we retain the movie theater—that it would add a central core, so to speak, as a destination.”

“What nobody ever felt that strongly about was that we had to own it,” Neville said.

Though the matter of New Canaan’s acquiring the Playhouse never went to referendum, Neville said, the town did see “an outpouring of people speak at the Board of Finance and Town Council” in favor of purchasing and preserving it as a movie theater.

Mallozzi said he would gather town officials to discuss ways the town might handle the Playhouse, including members of the Board of Finance and Town Council, such as the council’s chairman, Bill Walbert, who was in attendance.

Buzz Kanter, an alternate on the finance board, said that even putting the estimated $2 million to $3 million into the Playhouse wasn’t a long-term solution: “It’s just this stage and then there will be another stage and another stage.”

“It seems to me there are two measures of this,” Kanter said. “One is a financial measure. The other one—for lack of a better word—is a ‘community measure.’ I don’t know enough about how our town politics and structure works to determine what to do, but it certainly seems it is taking an impact on the financial side, one that needs to be addressed.”

One thought on “‘It’s Pretty Sobering’: Future of Playhouse Uncertain”