Shortly after a 25-point win over Greenwich last week in a scrimmage, someone asked New Canaan basketball head coach Danny Melzer what he thought of the Rams’ performance. 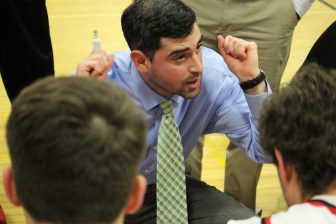 “I told them how I thought we did OK and how things could have gone a little better,” Melzer said. “They said, ‘Jeez, didn’t you win by 25? You’re being picky about a 25-point win?’ And it hit me that in my first year when we went 4-and-16 I had to find different things to celebrate in losses. And now we have done a 180 and we are being picky in wins.”

It’s not just this change in attitude that encapsulates just how far the Rams have come since Melzer took over the program four years ago. The Rams had significant personnel losses as Alex Gibbens, Ryan McAleer, Henry Pohle, Jon Hall, Colin Russo, Aaron Fishman, Brandon Sechan and Mario Castaldo have all graduated. In seasons past, losing eight seniors would have added up to a rebuild the following year.

That being said, this is a new era in New Canaan basketball. Instead of rebuilding, the Rams will be reloading.

“When we won the state championship, I kept telling everyone that this isn’t a one-year fluke,” Melzer said, recalling the 2019 CIAC title—one that the Rams will still be defending. Last season was prematurely canceled due to the COVID-19 pandemic and there will not be a state tourney again this season.

The FCIAC will have a playoff.

“We knew that the future was really bright when we got here,” Melzer said. “This is a special senior class but we are not going to be rebuilding next year either. We have really strong lower levels and a lot of talent in the program. It’s a credit to how much basketball these kids spend time playing—working on their game, getting better, getting their bodies more prepared for basketball, lifting year-round. It’s an exciting time to be a part of New Canaan basketball. It’s trending upwards. We want to keep that trend going and continue to improve every year.” 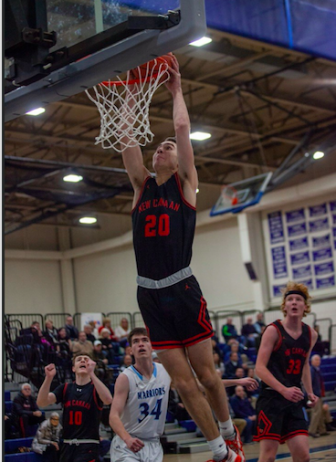 Leading the way for the 2021 Rams will be senior tri-captains Will Bozzella, Leo Magnus and Christian Sweeney.

Bozzella, a guard, has been injured for the best part of the two seasons. Melzer is looking forward to the impact his return will have on the Rams, both on and off the hardwood.

“He’s just an excellent teammate,” Melzer told NewCanaanite.com. “All the kids on the team love him, they feed off his positive energy, his leadership. He’s a floor general and does everything we need him to do. He handles the ball, he’s an excellent defender, dives all over the floor and is such a great communicator. He’s got a lot of skills and is the glue to the team. He’s just a really good basketball player who does a little bit of everything. He’s so excited to get his opportunity his senior year and I’m excited for him.”

Magnus was a key member of the Rams last season and brings with him a high level of play in all aspects of the game. Melzer said the Colorado College-bound forward worked hard in the offseason and made a huge jump from 2020.

“Leo is probably our best all-around player,” Melzer said. “Kids really respect how much work and time he’s put into improving and how seriously he takes basketball. He works on his game pretty much every single day for 12 months a year. He does all the things that really serious basketball players do. He leads by example in that regard and the younger guys respect that and try to follow his lead.”

Sweeney is a three-year, three-sport Varsity athlete who is the last major contributor left from the 2019 championship team.

“Christian is one those kids who when he says something, everyone stops to listen,” Melzer said. “They take what he’s saying to heart because he obviously means business. He leads from a physicality standpoint and a veteran standpoint. All the kids really respect his experience and how he knows how to win. He’s really coming into his own.”

Senior Denis Mulcahy is another integral player, someone who Melzer believes will have a huge impact on New Canaan’s success. A tremendous athlete, Mulcahy has flown under the radar over the past few seasons and is content to make his presence felt inconspicuously by mastering the intangibles.

“Denis is not going to lead our team in points, but he does all the dirty work for us,” Melzer said. “He’s an excellent screener and defender, a beast on the boards. He does a lot of good things that might go unappreciated or unnoticed in the box score. But everyone on our team knows and appreciates all he does.”

Braden Sweeney is another hard-nosed senior who will factor into Melzer’s plans coming off the bench and providing additional depth and physicality.

“Braden Sweeney is a kid that just goes out there, doesn’t say a word, doesn’t complain, doesn’t need anything from anybody,” Melzer said. “He just does his job and does whatever we ask him to do. He defends, rebounds, screens, can knock down an open jumper.” 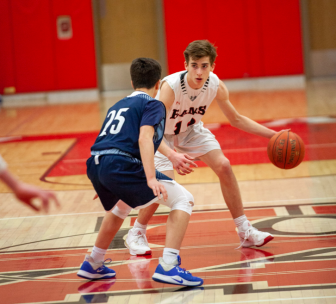 Sophomore Blake Wilson logged significant minutes in the second half of his freshman year and figures to be in New Canaan’s starting backcourt when the Rams tip off the season Tuesday against Ludlowe. Wilson brings a combination of maturity, poise and skill that Melzer has seldom seen in an underclassman.

“Blake is the real deal,” Melzer told New Canaanite.com. “He’s grown a couple of inches. He’s dunking. It just seems like he’s ahead of his years. He’s a competitor, he doesn’t play scared or nervous. He just goes out there and wants to guard the best player and doesn’t back down from anybody. He’s a sponge who soaks everything up, constantly asking questions and wants to get better. He’s a special kid and his potential is sky-high. He will be a big factor for us this year.”

Senior Gavin Bramwit, Juniors Ned Brady, Mike Sanseverino and Logan Sykes as well as Sophomore Jack Hladick and Freshman Griffin Bramwit will also make contributions and give the Rams additional depth. 6’7” sophomore Spencer Fuller-Wright is playing his way back from an ACL injury and will see time once he’s fully recovered.

“We have guys who are OK with being role players and they embrace their role,” Melzer said. “I can’t emphasize how important that is in basketball. Not everybody can score 20 points. The one common theme of every single kid on this team is that they want to win. When you have every kid on the team with the same objective it makes coaching much more enjoyable.”

Winning—something that was not a common occurrence in New Canaan not so long ago—is now the expectation for New Canaan. Last season the Rams, despite being bit by the injury bug, finished 12-8 (9-7 in the conference) and qualified for both the FCIAC and State playoffs for the second consecutive year. New Canaan figures to be a favorite to be in the FCIAC postseason mix once again this season, making a case to add the word “perennial” to its current identity of a playoff contender.

“Even if we lose a couple of game or if things don’t go our way, I think this is such a resilient, tight-knit group that they will find their way,” Melzer said. “They will persevere and figure it out and that makes my job a lot easier. There is a lot of sitting back and enjoying the ride and it’s a lot of fun to be a part of. We now go in games expecting to win. That is in large part to the way these guys approach practice every single day. When you watch us this year you’ll see a team that plays really hard, very physical and is a lot of fun to watch.”