[Editor’s Note: This is the second installment of ‘New Canine-ites,’ where we profile our local dogs. Last week, we met Beaufort the Newfoundland on Elm Street.]

Jagger the 5-year-old husky was named after Rolling Stones frontman Mick Jagger “because he’s a rock star,” owner and New Canaan resident Amy Mackimm says with a laugh on a recent afternoon on Elm Street near South Avenue. 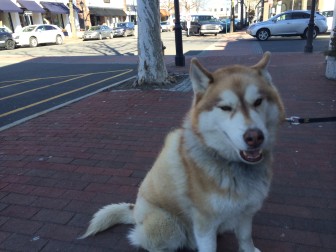 “He’s very mellow and friendly,” Mackimm told us of Jagger, who came from a breeder in Maryland. “A laid back personality, especially for a husky.”

Jagger’s favorite places to go in New Canaan include Waveny—both Spencer’s Run and the trails—and “he loves to walk in town and get dog treats over at Benefit,” Mackimm said. 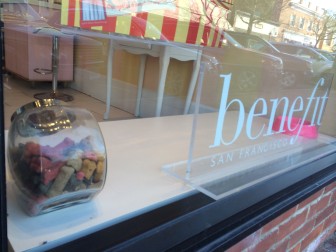 How much are those coo-kies in the window (ruff ruff). Credit: Michael Dinan

“And then there’s cookies over here by another store,” Mackimm said, nodding up Elm Street. “He knows where they all are.”

At home, Jagger eats ZiwiPeak natural dog food, said Mackimm, who was toting a bag of treats she’d just picked up from Village Critter Outfitter on Cherry Street (which may be doing a brisk business in paw wax and dog booties again with the snow New Canaan is expected to get).

“It [the dog food] is very expensive,” Mackimm said with a laugh. “He’s a picky eater.” 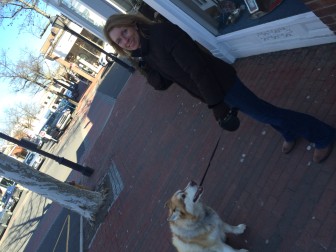 While we talked, Jagger himself passively watched the foot traffic pass—human and canine both—often taking in admiring words and glances, something Mackimm says is common.