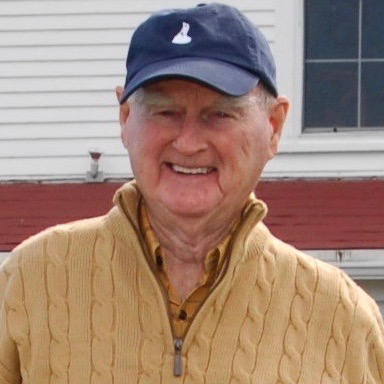 “None of us are deities,” James Alan MacKenzie reminded his loving family who surrounded him when he made the decision himself to live his remaining time on Earth as peacefully as possible.

That he was able to live his entire life at the helm of all decision-making proved a hallmark of his life before he left us to be with the love of his life, Joan—known to those who cherished her as Joansie. Jim, or Poppa as his 19 grandchildren and six great grandchildren adoringly called him, was a force of both compassion and strong will.

The first baby born in the new hospital in Quincy, Mass. on June 4th in 1926, James Alan MacKenzie was the third child of Margaret McHale and James Barton MacKenzie. His parents met in Buffalo during the influenza pandemic of 1917, when his father was transferred from a hospital in Quincy and placed under the care of a young nurse named Margaret from Blackrock, N.Y.

Jim’s parents married and moved to Quincy, where his father was an electrician for the Fore River Shipyard after initially working at a quarry in Quincy. Jim senior utilized that experience and formed MacKenzie and Forrestor, which was ultimately bought by Sprague Electric.

When Jim was six and his father fell ill, his parents moved him and his brother Jack and sisters Margaret and Audrey to the hamlet of Wadhams in Westport, N.Y. It was believed the fresh Adirondack air would improve his father’s condition, and he joined his maternal uncle running the McHale Farm while Jim’s mother cared for expectant and new mothers as the Essex County midwife. It is because of this profession Jim was blessed to call a baby girl, whose mother could not care for her, his youngest sister. Though her time with the Mackenzies was painfully brief, the impact she had on his life was evident even in his ninth decade.

Despite the often arduous life of maintaining a dairy farm in the 1930s, Jim regularly recalled an idyllic childhood more or less insulated from the Great Depression, including pies cooling on the sills of opened windows; wearing a Westport Central School jersey in soccer, baseball and basketball games; a beloved pet lamb that followed him everywhere; a colt that placed first at the Essex County Fair; as well as his beloved pet pig named Joe Louis.

Jim’s positive disposition and reflections on his youth was not born out of a life devoid of adversity; Jim spent nearly two years essentially in isolation at a Haverstraw Hospital in Albany for an orthopedic ailment during the polio epidemic, resulting in his witnessing new playmates succumb to the

disease. Jim was able to face hardship by drawing upon his memory of those he watched suffer worse fates with grace and resilience. It was also here that he first learned to play saxophone—a therapy taught to help children build strength, which he continued through his high school years.

He did not enjoy his chores on the farm, many of which he had to complete before the school day. In his spare time, Jim earned spending money by working at a local lumber mill.

From inside the four walls of Westport’s one-room schoolhouse, to the storied buildings of New York University, Jim’s devotion and commitment to learning only expanded in his adolescent years fueled by his intellectual curiosity. Jim had a calling other than an agricultural one, and confidently left at 18 for Manhattan, where he received his bachelor’s degree.

At the Breezy Point Beach Club in Rockaway one evening, Jim met Joan Marie Gorham. For Jim at least, it was love at first sight. He pursued her until she acquiesced and the two fell in love. Inspired by a desire to create a better life for his wife and growing family, he attended St John’s University night classes in order to receive his JD. This—coupled with his extraordinary work ethic—formed the foundation of his admirable career at Continental Can, United Fruit (which became United Brands), and ultimately Schlumberger.

Though the stories vary depending on the teller, it is evident from just one conversation with the MacKenzie children that their growing up was rarely uneventful. Even though Jim was tasked with dolling out punishments, his children also had the comfort of knowing they could always turn to him for sage advice.

Jim loved few things more than spending time with family and researching their lineage—which brought him all over New England and across the Atlantic to Scotland and Ireland – except perhaps a good book. His grandchildren recall on holidays asking the local bookstore for their newest arrivals that were their “biggest, most boring nonfiction” and would often learn upon Jim’s opening of the wrapped present that he’d already finished reading it.

Jim was as committed to his family and history as he was service to others—whether that be supporting friends in need or volunteering—particularly as a driver to anyone who needed a lift, Meals on Wheels, Pegasus, and the Red Cross. He was devoted to the Catholic Church until he became too ill.

Although Jim was more than apprehensive to move to the New Canaan Inn, feeling it was a sacrifice of his hard fought independence, it proved to be a beautiful place for him to call him home. His family was heartened to learn that he had not only forged new, immensely meaningful friendships, but that he happily engaged in more activities than he shared with his children, including but not limited to chauffeuring fellow residents to appointments and partaking in a talent show.

Jim’s family would love to share the celebration of his life with those who cherished him on Tuesday, November 5th. Calling hours will be held at Hoyt Funeral Home in New Canaan from 9 to 10 a.m. proceeded directly thereafter by interment at Lakeview Cemetery followed by a memorial service at the Talmadge Hill Community Church. Those who wish to honor Jim by donating in his name may contact Waveny LifeCare Network Director of Development Michelle Ernst (203) 594 5416 for information.

One thought on “James Alan MacKenzie, 93”