With sad and tragic timing, longtime New Canaan resident Kevin Sullivan, his wife Suzi and their wonderful and special daughter Brigid all died from unrelated medical causes over a short period of eight months. Suzi died in July 2021 and Kevin in October 2021 in Las Vegas, Nevada, their home for many years. Kevin was 76. Brigid died in March of 2022 in Bishop, California. 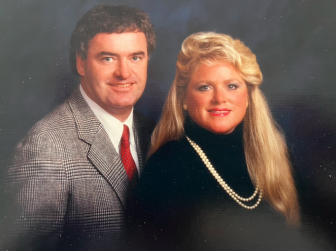 Kevin arrived in New Canaan in 1956 with his parents Joe and Liz and his brothers Mark, Jim and Patrick. and entered Saxe Junior High. Both Kevin, Class of ‘63, and Suzi, Class of ‘64, graduated from New Canaan High School where Kevin played on the 1962 NCHS state championship basketball team. He also was a regular in the legendary “after 5” basketball games with Joe Sikorsky. Kevin graduated from Fairfield University and pursued a long and successful career in the electronics industry holding positions with several of the industry giants before retiring to Las Vegas.

Kevin and Suzie were married in 1967 and remained forever loving and devoted to each other for 55 years. Brigid lived a challenging yet wonderful life full of optimism and love. She graduated from the University of San Diego and worked for many years as a teacher and daycare administrator.

The Sullivans will be forever remembered for their devotion to family and their infectious laughter and fun loving presence and especially Kevin’s tear inducing rendition of Danny Boy. Rest assured  “we will kneel and say an Ave for you and may you rest in peace until we come to you.”
May God bless Kevin, Suzi and Brigid and their families.