[The following youth sports game write-ups and photos were submitted by parents of the New Canaan Soccer Association. Please forward your own write-ups to editor@newcanaanite.com for publication on the site and visibility in our daily newsletter, Facebook page and Twitter feed.] 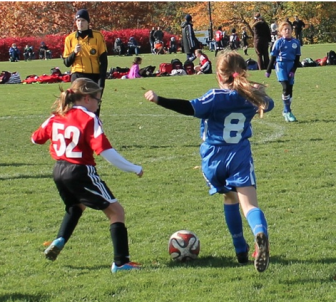 This past Sunday, despite cold and windy conditions, the New Canaan U9 Girls Red soccer team turned up the heat and blew away Old Greenwich 6-1.

It did not start out easy for the Red, as a very physical Old Greenwich team struck first to take an early 1-0 lead.

But it was all the motivation New Canaan needed.

Tema Wagner and Maggie Murphy put up a wall of defense that repelled several drives and advanced the ball up to midfielders Kailee See and Katie Quill who got the offensive machine going.

Lexie Tully began the onslaught with a sharp shot that evened the score. Kelly Polacek struck next with a hard fought goal in front of the Old Greenwich net. Then Ava Pertusiello intercepted a ball at midfield, pushed past the defense and delivered a strike into the high side of the goal to give New Canaan a 3-1 halftime lead.

The Red kept up the pressure in the second half with successive drives on goal from Isabel Cavanagh, Devon Russell and Fiona Mueller.

It was only a matter of time before New Canaan would find the net, when Lila Volpe beat the goalie on a close shot from the left side. Mueller continued the offensive momentum with a successful run down the sideline and finished with a hard strike to the high right corner.

The Red continued to prove their dominance when Wagner blazed past several defenders and lined a hard shot to the back of the goal to finish the six-goal barrage. With a commanding lead, New Canaan assumed a defensive posture and goalie Alexandra Gelvin blocked several late attempts on net to improve New Canaan’s record to 6-1-1 on the season. 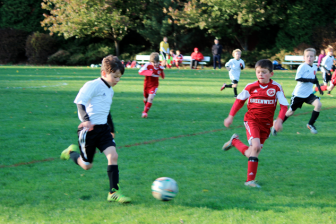 The New Canaan U9 Boys Red team beat Greenwich 3-2 on Sunday in an excitingly close match.

With just 15 minutes left in the game and Greenwich ahead 2-0, New Canaan stepped up the pace and scored three quick goals to win the game.

Jack Cuda, a fast and persistent midfielder, scored new Canaan’s first goal with an assist from Will Langford, as shouts of “Chuta!” the team’s unofficial rallying cry, echoed from the sideline.

Next, Ethan Schubert crossed a pass to Felipe Galavis, who tapped it over to Teddy Hoffstein. Teddy maneuvered in close and shot past the goalie to tie the game. The sideline erupted and fathers hugged each other in jubilation.

But the cheers were silenced when that goal was called back because the ball hadn’t left the box after a goal kick.

A few more minutes ticked by during which the New Canaan defense of Jaden Oyekanmi, Max Lowe, Teddy Werner and Cole Wilson stopped nearly every Greenwich attempt to get past midfield and goalkeeper Teddy Balkind caught everything that came his way.

Finally, Connor Lytle took a well-placed ball from Jaden Oyekanmi all the way to the goal in a breakaway sprint that tied the game with just a few minutes left on the clock.

Not satisfied with a tie, the boys kept the pressure on.

The final goal of the game was a showcase of teamwork, with the ball going up the field via a series of passes from Ben Bilden to Jack Cuda, back to Connor Lytle, who passed again to Augusto Baldini in the box, who kicked in the winning goal.

The team is undefeated as they go into their final game of the season next Sunday. 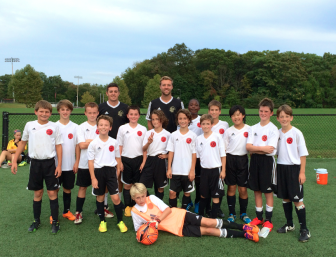 On Sunday, the New Canaan U12 Boys Red soccer team and coach Matt Lannon met the Fairfield FUSA at home on Conner Field for their final regular season league game.

Despite the cold and wind, the team captured a decisive 5-0 win against Fairfield.

The U12 Boys Red team heads to Wilton on Saturday as the top seed to play in the Division semi-finals.

The New Canaan U-14 Girls Red soccer team won its second straight Premier League game this past Sunday, beating Northeast United by a score of 1-0 in a fierce defensive struggle on a bitter cold Water Tower field.

During the first half there were very few shots on goal, with both teams playing excellent defense. Sarah Spadaccini, Nora Belodeau and Joelle Anselmo all played tough defense in the middle of the field and Lucy Couttes, “KK” Marcus, Jessie Eccleston and Ella Goodman controlled the ball on the outside.

Just before the first half, New Canaan scored the only goal on an own goal situation created by an attacking Claire Ross. Jessie Dolby, India Otero and Carolyne Schuh, who were all in on the play.

New Canaan displayed excellent ball control throughout the game with Bridgett Salmini, Meghan Kloud and Katelyn Sparks displaying some fancy footwork, and Kayla Beck and Lauren Bisceglia charging toward the opposing goal all evening. Steller goaltending by Jordan Paterson was needed in the second half to preserve the victory.

U-14 Red improved to 8-4 on the season (including all league games, tournament games and friendly scrimmages), with one more regular season game on the schedule.

It was a cold, windy day in Wilton, but that didn’t stop New Canaan. Just one minute into the game, NC Black jumped out to a 1-0 lead with an unassisted goal by Charlotte Walters, and never looked back.

The goalie combination of Maeve Hibbert in the first half and Sophie Brauweiler in the second half blocked every shot that came their way.

Claire Pellegrino led a stand out effort throughout the game.  She was seemingly everywhere in the midfield, chasing down the ball time after time.

On defense, Claire Ognibene and Lauryn Lee did a great job shutting down Wilton’s charges with Ognibene clearing the ball with booming kicks and Lee’s relentless stopping of numerous attacks.

Throughout the game, the team put constant pressure on Wilton, with exceptionally strong play from the offensive line including Sloane Griffiths, Celia Parkhill, Logan Severance, and Hadley Walker.

The final face off for this U-9 Girls Black team is on Nov. 9.

Despite the wind and the biting cold, New Canaan U9 Black was hot!

Playing headlong into the wind, the offensive line of Luke Frame, Matthew Stimpson and Alex Werner were up and running. Within minutes they made a trio of passes, Stimpson to Werner who crossed to Frame, for the goal!

Frame followed this goal up with a second goal, flicked over the goalie’s head. Nate Ehrlich and Nis Tuga joined the front line rotation and kept intense pressure on Stamford.

Not to be outdone, the defense of Chase Abbott, Nathan Sieckhaus, Cyrus Pearson and Nate Markin worked the sidelines, feeding the ball up the field. Enzo Fredericks and Fletcher Heron anchored the center defense and goalie, Benji Sturcke denied Stamford’s attempts to score.

In the second half, New Canaan cemented the lead with a quick goal by Finn Greiner. Stamford rallied for a charge on goal, but Markin deflected a shot to the goal and Stamford remained scoreless. Coordinated teamwork among Stimpson, Tuga and Heron resulted in Heron adding to the tally with a shot over the goalie’s head.

Coach James kept Stamford guessing with quick rotations, allowing all the boys a chance to play the entire field. Without exception, U9 Black’s precision passing and awareness of openings in the center, proved too much for Stamford and the game ended with a score of 6-0.