Saying they’re concerned about new traffic, safety hazards and uses that could result from replacing a nonprofit organization-owned private residence on Chichester Road with a type of clubhouse, neighbors last week voiced opposition to the New Canaan Beautification League’s plans. 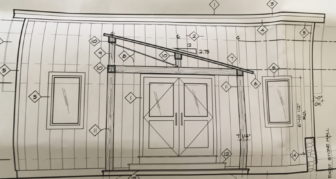 Rendering of the shed proposed for 89 Chichester Road.

Though the new structure proposed for the 2.65-acre property at 89 Chichester Road—site of the Lee Garden, open to the public—is far smaller than the Colonial that stands there now, its proposed function as a place for league members to work, gather and use a restroom amounts to an increased use that will only grow with the group’s membership, next-door neighbor Lisa Mackenzie told members of the Planning & Zoning Commission at their April 26 meeting. 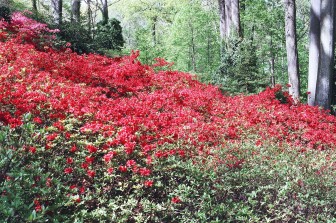 “We believe it will have a negative impact on our neighborhood and particularly on our safety and property value,” Mackenzie said during a public hearing, held in the Town Meeting Room.

“No offense to the league—they do wonderful, wonderful things—but let’s call this what it really is,” Mackenzie said, adding that she envisioned “strangers driving up and down, parking on our property, picking up and dropping off equipment, parking for meetings, making bathroom runs.”

“One could argue that the general public [at Lee Garden] should have access to a bathroom. So why not hide a seasonal port-a-john, near the existing central public parking lot, just as Irwin has done? As far as storage goes, there is already a storage shed tucked into the garden. If this is not suitable, why not add onto it or purchase a larger one? There are other solutions to the league’s needs without building a visitors’ center on a private home in a residential neighborhood.”

According to an application for special permits filed on behalf of the league by attorney David Rucci of New Canaan’s Lampert Toohey & Rucci LLC, plans call for the demolition of the existing 1,664-square-foot home (the demo permit is in hand, tax records show), and construction on its footprint—though further from the Mackenzie’s property at the northern end of the lot—of a new approximately 400-square-foot “shed.” Set back 100 feet from Chichester Road itself, the shed would have storage space, a half bathroom and utility sink and be used only for league members, Rucci said. Under an agreement now in place with the Mackenzies, there currently is driveway access to the site, though that arrangement could be discussed, he said.

Use of the new shed would be less intensive than the existing residence, according to Rucci. The change is consistent with the Plan of Conservation & Development’s recommendation on open space preservation and access, and the shed itself would be used exclusively from spring through the fall, and winterized each year, he said.

“That area will not be open to the public,” Rucci said. “The reason I am stressing that is because I know that there are neighbors here this evening who very concerned about this new shed becoming some sort of meeting center, or nature center, something that we are going to use to fundraise, have weddings at—none of those things are going to happen. You can put conditions on our approval, that what is happening today on this site will be what is happening tomorrow on that site once the shed is built. There is nothing new being planned at all.”

Specifically, the league is seeking under the New Canaan Zoning Regulations special permits to operate as an organization serving a community need (see page 45 of the regs), allow an accessory building to have a principal use (page 53) and relocate an existing deer fence and gate (page 127).

Commissioners asked for clarification on the total footprint of the proposed shed (362 square feet for the shed itself, 533 total with a covered portico), whether the structure would go from two to one story (yes), whether the patio or “viewing platform” already attached to the existing house and which would be preserved is elevated (no), how does the public know where to park (there’s a sign), what prevents visitors from mistakenly traveling up the private driveway (sign there, too), when the public parking lot at Lee Garden was created (between 1978 and 1980, with help on where to site it from the town) and whether there have been any complaints in the last decade about use of the gardens (no).

P&Z Commissioner Dick Ward noted that the league’s application seeks to establish, by special permit, an “institutional use” for the property.

“It seems that it has been used by this organization for some time without a special permit,” Ward said. “What’s been going on? Why wasn’t a special permit applied for at the time that the use as an institution became apparent?”

Rucci answered that although he had no definitive answer to the question, it’s likely the organization that inherited the property—now the Beautification League—simply continued with the activities of its original owner.

Ward suggested that Rucci conceive of some conditions to the possible approval of his client’s application in order to protect against “institutional creep.”

The neighbors who took to the podium in opposition to the proposal said out loud that they valued the league’s work generally, and that their concerns were about unintended future uses of the shed.

“Today it’s a little shed, tomorrow it’s a pavilion and then it gets bigger and bigger,” Casey Fundaro of Myanos Road said.

Amy Murphy Carroll, of 43 Chichester Road, questioned whether the project itself was appropriately noticed to the public, and said the plans were “more complicated” than they appeared.

“To consider [the proposed structure] a ‘shed’ is an understatement,” she said.

Mackenzie asked the commissioners to consider: “If this scenario was being proposed for your neighbor’s residence or your neighborhood, would you be in favor?”

The league’s Peggy Dannemann, a past president, told P&Z that the new structure essentially would offer “a bathroom, books and table and chairs.”

“It’s not really a meeting place and not for fundraisers,” she said.

Dannemann then reviewed some of the property’s history (see more here). It came to the league’s predecessor organization in 1978 on the death of George Lee, an avid amateur gardener who planted more than 2,000 azaleas as well as rhododendrons and other species on the property, in part for the viewing enjoyment of his wife Olive, a woman who appears to have been homebound and immobile. The Garden Center of New Canaan was the sole beneficiary named by the couple, who had no children, Dannemann said. The league currently has some workshops, tours to garden groups and member receptions during peak bloom times, she said.

“It is our hope that a change in use allowed from a single property residence to that a of a garden shed, will allow the New Canaan Beautification League to focus our resources and our efforts and energies on the stewardship of the garden and not on maintaining a residence,” she said.

Not every neighbor who spoke at the public hearing voiced opposition to the league’s plans.

Betsy Sammarco of 54 Toquam Road, said she lives “very close” to Lee Garden and that what happens there “really does matter to me.”

“And I just hope that the neighbors who are here, and the commission, just listen to what is truly intended to happen with this piece of property and not what people are claiming is going to happen at the property. I am a neighbor there, too. My husband and I have always joked that the reason we bought our house was because of Lee Garden, so we love it and I don’t ever want to leave because of Lee Garden. But Lee Garden is a lot of work. It needs some help and the proposed changes, to me as a neighbor, enhances Lee Garden and the gem of a garden that it is. It’s a rare piece of property. You won’t see this kind of property anywhere else. The events that have happened at Lee Garden have been very non-impactful. I’ve never had a problem with cars. In fact, most of the problems I have had with parking and cars, is with private residences and the parties that they have.”

P&Z continued the matter to its next regular meeting, scheduled for May 31.

One thought on “‘Let’s Call This What It Really Is’: Neighbors Voice Concerns About Traffic, Expanded Use at Beautification League Property”